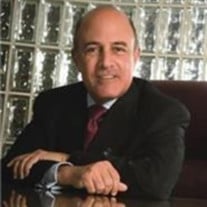 Alan S. Becker, 1946-2020, beloved son, husband, father, grandfather, and friend passed away at the age of 74 on July 4th, 2020. Mr. Becker grew up in Brooklyn, where his parents Jack and Lorraine Becker met and were married. He spent his spent summers with his late brother Martin at Sun Mountain overnight camp. He entered Brooklyn College at the age of 16, went on to attend the University of Miami School of Law, and received the highest grade on the Bar Exam in 1969. Mr. Becker began his legal career in the Office of the Attorney General and as an Assistant Public Defender (1969–1972). At the age of 26, Mr. Becker became the (then) youngest person to be elected as a State Representative in the Florida Legislature, where he served three terms from 1972-1978. As a member of the Legislature and the Florida Law Revision Council (1975–1976), he was the principal author and/or sponsor of the Condominium Act, Florida Corporation Act, Mechanic's Lien Act, Evidence Code, Biscayne Bay Aquatic Preserve Act, and Reformed Dade County Grand Jury system, and more. Mr. Becker was a lifelong Democrat who prided himself on being able to work collaboratively and collegiately with people on both sides of the aisle in order to get things done for the betterment of his State, a practice he continued throughout the rest of his life and career. Mr. Becker met his friend and future law partner, Gary Poliakoff, in law school during a mock trial competition when they were paired up, and they won the binding real-life case on behalf of their client. They decided to form a partnership, and began by working out of the trunk of a car, passionately advocating for the rights of condominium owners and associations. Together they founded Becker & Poliakoff, PA, which is now one of the top 20 largest law firms in Florida with offices in New York, New Jersey, and Washington, DC. Mr. Becker served as the Managing Shareholder of the Firm for a time as well. A successful businessman, political leader, and college lecturer, Florida Trend magazine has recognized Mr. Becker as a member of the ""Legal Elite"" every year since the award's inception. He was also recognized by South Florida CEO Magazine as a member of South Florida's ""Power Elite"" and by CAMACOL, the Latin Chamber of Commerce as "Professional of the Year". In addition, he was selected by his peers to be included in the 2006 "Best Lawyers in America and was awarded the Global Achievement Award by the Florida Council of International Development. He was also awarded the Daily Business Review Lifetime Achievement Award (for legal profession) (2015). Alan Becker was a member of the Enterprise Florida Board of Directors (for 20 years) and Executive Committee, and served as Vice-Chair (2015-2017). Enterprise Florida is the official economic development organization for the State of Florida. In 2012, he was awarded the Governor's Business Ambassador Medallion for his contributions to economic development in Florida. He also previously served as the Chair of the Beacon Council (2011-12), Miami-Dade County's economic development agency, and on the Board of Directors of Florida Atlantic University Foundation. Mr. Becker was the Honorary Consul of the Czech Republic (1992-2016), and was able to pass the Czech Bar as one of very few foreigners to do so. He was also the author of two books. The first, of which he was co-author, was Florida Rules of Evidence. He also wrote, ""There's Always Room at the Top: The 8 Secrets of the Super Successful,"" in which he provides life lessons from interviews with supersuccessful people in various fields, including politics, the arts, and corporate America. In his book, Mr. Becker taught how they have seen and grasped opportunity, have overcome adversity, have persevered through difficulty, and have maintained a positive outlook in the face of negative events. These interviews and his own experiences were intended to be a source of inspiration and strength. Alan Becker taught the ""Business of Law"" at the University of Miami Law School, and ""Leadership"" at Keiser University. He once said that ""law and politics were in his blood, and teaching served his soul."" Always the historian, he was known to quote world leaders. His first lesson in every class: Winston Churchill's ""Never, ever, ever quit."" Mr. Becker is survived by his mother, Lorraine Becker, his beloved wife, Debra Jean Becker, his two daughters, Marni and Ilana, his son-in-law, Roie, and his two grandchildren, Adam and Sabrina. He was a loving son, husband, father, and grandfather, who loved listening to NPR, going to Broadway shows, spending time with his dogs, and at his beautiful house in Maine. In his ""free"" time, he enjoyed painting landscapes and watching his grandson change the world through his non-profit, Wuf Shanti Children's Wellness Foundation, of which he also sat on the Board. Services will be held virtually on Zoom, on Tuesday, July 7, 2020, at 11:00am, with Shiva to follow from 2:00pm-4:00pm, and again on Wednesday, July 8th from 5:00pm-7:00pm. To attend any of these services, please RSVP in advance at https://tinyurl.com/AlanBeckerServices. He asked to thank all of his colleagues, clients, supporters, and friends, and wanted you to know that he ""had a good run, and wishes you a longer one."" He said it with a smile, as that was his sense of humor. In lieu of flowers or food, please consider a donation to: Wuf Shanti Children's Wellness Foundation https://wufshanti.com. He will be missed by many and remembered always. Arrangements by Levitt-Weinstein/Beth David Memorial Chapel,(954) 963-2400

Alan S. Becker, 1946-2020, beloved son, husband, father, grandfather, and friend passed away at the age of 74 on July 4th, 2020. Mr. Becker grew up in Brooklyn, where his parents Jack and Lorraine Becker met and were married. He spent his spent... View Obituary & Service Information

The family of Alan S. Becker created this Life Tributes page to make it easy to share your memories.