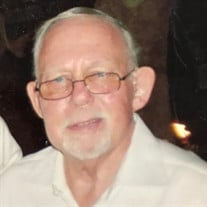 Albert S. Dribin, O.D., was born on February 5, 1925 and died on August 9, 2019, at the age of 94. He was predeceased by his wife of 49 years, Florence L. Dribin. He is survived by his sons Paul (Brenda) Dribin and Michael (Lori) Dribin; his grandchildren, Sam (Alli) Dribin, Aaron Dribin, Amy (Jeffrey) Escott and Tim (Tanya) Dribin; and great-grandchildren, Zev, Ezra, Lilly, Henry, Charley and Eli. Albert was also fortunate to meet and spend wonderful years with the second love of his life, Elena Perez, who also survives him. Albert was born and raised in Chicago, Illinois, was a World War II veteran and was a German prisoner of war. He became an optometrist following the war and also worked with his father, Meyer Dribin, in his jewelry store on Division Street in Chicago. He was a longtime member of Congregation K.I.N.S. Of West Rogers Park in Chicago. He moved to Miami Beach with his wife, Florence, in 1993, where he spent the rest of his life and was a member of Temple Beth Sholom. Graveside Service will be conducted at 10:00 a.m., Monday, August 12, 2019 at Lakeside Memorial Park, 10301 NW 25th Street, Doral, Florida. Arrangements by Levitt-Weinstein Blasberg-Rubin-Zilbert (305) 932-2700

The family of Albert S. Dribin O.D. created this Life Tributes page to make it easy to share your memories.

Send flowers to the Dribin family.