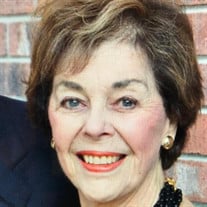 Arline Furman Polinsky, HOLLYWOOD, FL – Arline Furman Polinsky, 86, formerly of Columbia, SC, passed away on April 14, 2020, in Hollywood, FL, just hours after losing her beloved husband, Jerry. Born in Boston on April 30, 1933, she was the oldest daughter of Gertrude and Edward Furman, who predeceased her, as did her sister Rochelle Furman. She is survived by her daughters, Nancy Johnson of Pittsburgh, PA, and Joanna Berens of Hollywood, FL; sons-in-law David Johnson and Eli Berens; grandsons Michael and Eric Johnson and Samuel Berens; and sister Marilyn Goldstein of Randolph, MA. Love of family and friends, commitment to community, and the pursuit of artistic beauty were the driving forces in Arline’s life. A trained artist and licensed interior designer, she could enhance any space, whether it was by simply straightening a crooked picture on the wall or overseeing a total room makeover. She made any place more attractive merely by her presence, as she was a striking woman with an elegant and gracious style. When she chaired Columbia’s first Symphony Designer Showhouse, in the 1970s, she combined her passion for creating beautiful homes with her appreciation for the arts and her desire to support the cultural life of the city. She continued to add to the region’s vibrancy in the decades that followed, becoming a charter member and board member of the Jewish Historical Society of South Carolina and serving on the organizing committee and as a charter member of EdVenture Children’s Museum. When she founded the Columbia Jewish Film Festival in 2000, she launched an event that has become a highly regarded annual happening. Her commitment to her synagogue, Tree of Life Congregation, was unwavering, and she was an active and vital congregant in many ways, including founding the temple’s annual food festival. Arline spent many years working as a real estate agent, and she derived great pleasure from helping people find their ideal house and turn it into a home. Her own home was a warm and welcoming place where dear girlfriends popped in through the kitchen door without knocking, where the card table was set up for weekly bridge games, and where friends and family gathered often for casual visits, evenings watching slide shows, lovely dinner parties, and delicious holiday meals. Nothing gave Arline more pleasure than cooking and baking for loved ones gathered around her beautifully set table. If love has a smell, it was the scent of her pound cake baking in the oven in anticipation of a daughter returning home from college, a grandchild coming to visit, or the celebration of some happy event. She lived for her family and was a devoted wife to Jerry for more than 64 years. Living midway between her daughters in Pennsylvania and Florida, she spent many, many hours on the highway, driving up and down the eastern seaboard to see school plays, piano recitals, little league games, graduation ceremonies, and other events. She spent so much time in Pittsburgh that she developed a circle of friends and became part of a regular bridge game there. Many Pittsburghers were surprised to learn that she did not actually live in the city. Now she lives on in the hearts and minds of those who knew her and were touched by her, and the hereafter is certainly more beautiful for her presence there. Due to the current pandemic, a private burial will be held in Columbia on Friday, April 17, at 11 a.m. It can be viewed via a live stream on the Dunbar Funeral Home – Devine Facebook site. Memorial donations may be made to Tree of Life Congregation, 6719 N. Trenholm Road, Columbia, SC, 29206, or the Columbia Jewish Film Festival, c/o Katie & Irwin Kahn Jewish Community Center, 306 Flora Drive, Columbia, SC, 29223.

The family of Arline Polinsky created this Life Tributes page to make it easy to share your memories.

Send flowers to the Polinsky family.