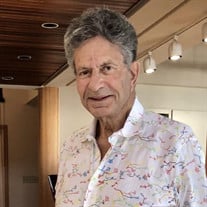 Arthur E. Ballen, a man deeply loved and respected by many, passed away Thursday January 6th, surrounded by his loving children and his wife of 53 years. Arthur was born in Philadelphia on December 5th, 1932, to Mildred and William Ballen. He grew up in an apartment over a drug store with his parents and sister Lois, playing stickball and sidewalk games with shop-owners’ kids until the sun went down. At the age of seven he tragically lost his father. Soon after his Bar Mitzvah, where he felt like a king for a day, he moved to Atlantic City with his mom and sister, where he officially took the role of man of the family. Arthur was scrappy, not only in his young wiry frame, but in his determination to patch together odd jobs to help support his single mother, buy books, and gamble with his pals at Kent State College and Rutgers Law School (Class of ‘59). Arthur’s drive to make a dime started at age ten, at the golf course, as the “world’s scrawniest caddy.” He worked diligently through his younger years as a: newsboy, Fuller brush salesman, waiter, armory assembly worker, and as a driver for a school bus, a Bond bread truck, and an Atlantic City Taxi company. One of his most unusual jobs was guessing peoples’ weights on the Atlantic City boardwalk! Arthur had a long (62-year!), exciting, and successful law career, completely by his own design. He forged new roads, took chances, and made deals with a handshake. He was a kind and generous employer of many — as evidenced by a 55-year streak with his dedicated secretary, Reenie. Arthur was admired by colleagues and clients for his steadfast determination and grit, along with a presence that let them know they were in the company of a master. Arthur was a formidable opponent in the courtroom, fighting for the little guy, the injured, the mistreated, and the wrongly accused. He won countless cases and hearts with his honest resolve. He was driven by a pursuit of justice and a compassionate innate desire to reduce suffering. Arthur was a rain-maker — forging relationships and traveling for cases all over the world. He collected devoted clients and friends throughout South and Central America, Suriname, Siberia, Mongolia, Russia, Greece, Cyprus, Indonesia, Malaysia, Switzerland, Holland, Ethiopia, and Nigeria. Arthur always followed his instinct, which was sharp and decisive. His best instinctual decision, by far, at age 35, was relentlessly pursuing Barbara to go out with him “just once,” despite her resistance. She knew better than to date an “old” bachelor with overly-greased-back hair and car seats full of empty cigarette boxes. Two months later they were married in her parents’ living room. He must have known that Barbara would devote her life to making his life full and rich, supporting his every whim and moving mountains along the way. His soul surely recognized in hers that marrying her was the only way he would thrive well into his 80’s, beating the odds again and again. Arthur did not have much patience for long rambling stories, being placed on hold, laziness, excuses, That Rap Music, or horrific noises like the vacuum cleaner or blender. He had a penchant for knock-off watches, Tastycakes, Jewish Delis, chocolate milk, a good practical joke, the Bottom Line, and marathon games of chess, backgammon, and poker. In fact, his last good evening, three weeks before his passing, was spent at his Thursday night poker game, where he proudly left as the big winner of the night. Arthur’s son Leigh and daughter Erika revered their dad and nagged him endlessly to eat right and exercise so they could have him around for as long as humanely possible. He loved talking business with Leigh, and generously tolerated the healthy creations Erika forced upon him. They loved the wisdom he distilled down with few words. His kids were the apple of his eye. He impressed his daughter-in-law Leslie and son-in-law Matt with how he uniquely wove together work and family. They both learned early to see right through his grouchy exterior to his warm soft center. His four grandchildren, Claudia, Jack, Avi, and Marley, are proud to carry on his gigantic legacy. Arthur taught his family, through example, that you do absolutely anything for family. Arthur always had people guessing — he looked at least 10 years younger than his age with his full head of luxurious hair and sparkly eyes. He had no interest in material things, save for some nice dark suits. He never feigned affection nor interest; being on the receiving end of his wide smile or meaty handshake was a uniquely nice feeling. Arthur valued friends as people who would have your back — no matter what — and he was lucky to have many who would be honored to be in the foxhole with him. Arthur is described by friends and family as “a real class act,” “a legend,” “larger than life,” “a loyal friend,” “the funniest person I know,” “my hero,” “the most generous man I ever knew,” “a paradoxical enigma,” “a man of his word,” and simply “The Best.” Many hearts, the world over, share the burden of our profound loss. The family requests donations in memory of Arthur Ballen to Chai Lifeline, www.chailifeline.org, Delivering Joy & Hope to Children and Families Impacted by Illness & Crisis. Graveside Service 2:30 p.m. Sunday, January 9, 2022 at Lakeside Memorial Park, 10301 NW 25 Street, Doral, Florida 33172. Arrangements by Levitt Weinstein Blasberg-Rubin-Zilbert Memorial Chapel (305) 932-2700

Arthur E. Ballen, a man deeply loved and respected by many, passed away Thursday January 6th, surrounded by his loving children and his wife of 53 years. Arthur was born in Philadelphia on December 5th, 1932, to Mildred and William Ballen. He... View Obituary & Service Information

The family of Arthur E. Ballen created this Life Tributes page to make it easy to share your memories.

Arthur E. Ballen, a man deeply loved and respected by many, passed...