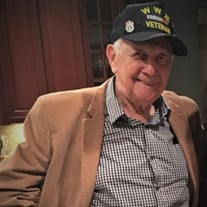 Arthur Joseph Braunstein Arthur (A.J.) Braunstein, long time South Florida resident, died April 25, 2022, in Miami at the age of 98. Arthur was born in New York City to Jenny and Willy Braunstein, who came to America from Hungary. A first generation American, Arthur was proud of his service in the United States Army during World War II. He spoke fluent Hungarian, which served him well working in military intelligence while stationed in Europe. After his military service Arthur married May Goldman and started a family in New York City. Having worked as a small business owner early in his career, Arthur then became a toy buyer for a large New York City department store chain. The family moved to Miami in 1968, settling in the Kendall area. After the move to South Florida, Arthur came full circle, again heading a small business as the owner of a popular chain of toy stores known as the Red Balloon. After Arthur and May divorced, Arthur married Jan Jacob and relocated to California, eventually returning to Florida and moving to Century Village at Pembroke Pines. After Jan’s passing, he married Laura Rich, also of Century Village, and they remained together until Laura’s passing. After Laura passed, Arthur met Norma Chin at a dance in Century Village. The two fell in love. Arthur was warmly embraced by Norma’s loving family, and the two became inseparable. With Norma’s encouragement, Arthur remained active in various organizations, such as the Knights of Pythias, and was President of Century Village’s New Jersey Social Club for 3 years. Arthur will be remembered for his outgoing friendly personality, his ready smile and his love of dancing. He was an avid handball player and later a racquetball player, well into his 90s. Arthur is survived by his two children, Bill and Robert of Los Angeles, as well as his loving partner, Norma.

The family of Arthur J. Braunstein created this Life Tributes page to make it easy to share your memories.