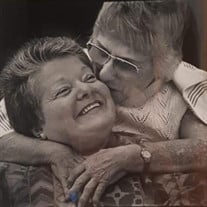 Barbara Levine died Monday, January 11th at Aventura Hospital in Aventura, Florida, at the age of 82. Born April 2, 1938, in Jersey City, New Jersey, she was the only daughter of the late Frieda and Murray Stein and sister to the late Billy Stein. Barbara was a loving daughter, sister, wife, mother, grandmother and great grandmother. She touched so many lives across several generations. Barbara met and married Sandy Levine in March of 1960 and was married for 18 years. Together they had three beautiful daughters - Jill, Edie and Mindy. Their lives were full of family-get-togethers, fun times and a lot of love. They lived in North Carolina, Illinois and New Jersey. Barbara moved to Aventura, Florida in 1978 to be close to her parents. They made an amazing team and shared many wonderful memories. Edie moved to Florida in 1984 and joined the fun, giving them a run for their money. Edie’s daughter, Michelle, was born in 1990 and became the absolute love of everyone’s life. This little girl changed everyone and everything for the better. She shared a bond with Barbara that was unparalleled. The late Sabrina Goldstein joined the crew in 2010. She loved sharing the holidays with family and spent many afternoons with Barbara whiling away the days. Marissa, David, and Alison, her grandchildren all spent time with Barbara over their summer vacations. Many amazing memories blossomed from the time spent together. Madison, another grandchild, attended the University of Florida from 2014-2017. One of her greatest joys was spending time with her Grandma Barbara. It was an unexpected privilege that she came to cherish. Yvette Sinclair was a lifesaver and a blessing that helped us all, most especially Barbara. Her kindness, humor, and dedication made the impossible possible. We are all eternally grateful for the love and care she showed our mother - each and every day. Barbara lived, loved, and laughed all while enduring Multiple Sclerosis. To say she ‘fought a good fight’ is an understatement of epic proportion. She had an insatiable appetite for life and loved her family fiercely. She was an extraordinary example of will, determination, and spirit. She is survived by her children: Jill Harris (Lauri Bettencourt) of North Andover, Massachusetts, Edie Levine (Luis Goldstein) of Hallandale, Florida, Mindy (Bob) Hines of Andover, Massachusetts; five grandchildren: Marissa (Joel) Gillis, Michelle (Raymond) Golenski, David Harris, Alison (Eshed) Resch, Madison Hines; and one great-granddaughter Meredith. Services are being held Thursday, January 14 at 2:00 PM, at Beth David Memorial Gardens/Levitt-Weinstein, 3201 N. 72nd Avenue, Hollywood, Florida. Zoom link: https://viewneral.zoom.us/j/92204650556?pwd=czVUMHpRdGtLWWlqWWNpNDUrTjFOQT09 View ID: 922 0465 0556 Password: 768996 In lieu of flowers, the family asks that donations in her memory be directed to the National Multiple Sclerosis Society, www.nationalmssociety.org/ Arrangements by Levitt-Weinstein Blasberg-Rubin-Zilbert Memorial Chapel (305) 932-2700

Barbara Levine died Monday, January 11th at Aventura Hospital in Aventura, Florida, at the age of 82. Born April 2, 1938, in Jersey City, New Jersey, she was the only daughter of the late Frieda and Murray Stein and sister to the late Billy... View Obituary & Service Information

The family of Barbara Lois Levine created this Life Tributes page to make it easy to share your memories.