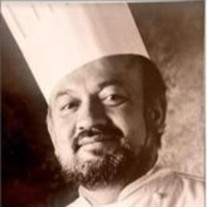 Daniel Durand July 6, 1943 - March 11, 2022 Coral Gables, Florida - Daniel Durand born July 6, 1943 in Valence, France passed away peacefully at home with his beloved wife Angela and his son James on March 11, 2022. Born in Valence, France on July 6, 1943 then tenth of 12 siblings, the kitchen became Daniel's passion at an early age. As a young teen he ran away from home to work in a Valence hotel and eventually train in the culinary arts to become commis at L'Ambassade de Savoie in Paris. Later he led a colorful and exciting life aboard Baron Edmond de Rothschild's yacht Gitana IV and also as chef to their graces the 13th Duke and Duchess of Bedford at Woburn Abbey. Thereafter he had restaurants in London before emigrating to California in 1976 to teach at the California Culinary Academy and open restaurants in San Francisco and Los Angeles, where he met and married Angela. In 1986 he became Culinary Director of Royal Viking Line (RVL) where he opened the first Paul Bocuse starred restaurant onboard the Royal Viking Sun. During his brilliant career he circumnavigated the world twice and earned distinctions as Maitre Cuisinier de France, Disciple de Paul Bocuse, and member of the French Culinary Academy. Finally he moved to Miami and went on to consult and run food and beverage operations in the cruise industry before starting his company CHEFWISE, creating his own culinary products chiefly for the cruise and hospitality industries. Known and loved by friends and admirers in many parts of the world, Daniel will be dearly missed by Angela, his wife of 35 years; former wife, Elaine, mother of son, James (Catherine); and his grandchildren, Andre, Amelie and Alex who reside in the UK; and his remaining sisters in France, Christiane (Jacques) and Marie Therese (Daniel). Services will be private. A memorial/celebration of life will be held at a later date. Donations may be made in memory of Daniel Durand to: The American Liver Foundation, https://liverfoundation.org/for-patients/donate-now/, The Humane Farming Association, https://www.hfa.org/, Temple Beth Am Miami, https://www.tbam.org/ Arrangements by Levitt-Weinstein Blasberg-Rubin-Zilbert Memorial Chapel (305) 932-2700

The family of Daniel Durand created this Life Tributes page to make it easy to share your memories.