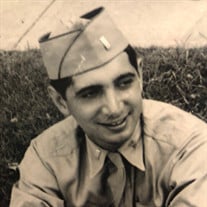 Dr. Harry Isadore Kaufman, an incredible man who proudly served his country as a Captain and Doctor in World War II, passed away peacefully in his home on Veterans Day, 11/11/2019, at the age of 95. He was a devoted and loving husband to his wife Fran Kaufman, a blessed memory, for 57 years, and an adoring father, grandfather, great-grandfather, uncle, father-in-law and friend. Harry graduated from University of Illinois Medical School at 22 years old, served with distinction in the US Army, completed his pediatrics residency at Chicago’s Cook County Hospital and then opened his own Pediatric practice in North Miami Beach. He was wholeheartedly dedicated to each of his patients throughout his accomplished career. Harry also worked tirelessly to improve the lives of children and families throughout the city, state and country as a leader and children’s advocate in the La Leche League and as a Guardian Ad Litem. He was a compassionate and courageous man who led by example in every aspect of his life. Harry never said an unkind word about anyone, and he was a champion for those who were unable to defend themselves. He had great gusto for life, and enjoyed his years of retirement swimming, reading the New York Times, doing cross-word puzzles and playing daily tennis matches with his tennis buddies into his 90’s. Harry had an exceptional sense of humor, unparalleled humility and a deep-rooted love of learning. The world was better because our “Poppie” lived in it. He is survived by his children, Jill Hertzberg and Chip Kaufman and their respective spouses, Robert Hertzberg and Ana Kaufman; grandchildren Jerri Bassuk, Larry Bassuk, Danny Hertzberg, Amanda Hertzberg, Hillary Hertzberg, Jasmine Kaufman, Marshall Kaufman, Abby Sherkow, Ruby Kaufman; and great-grandchildren George Bassuk, Jordan Bassuk and Hailee Hertzberg; uncle of the Snyder Family. In lieu of flowers, please make donations in memory of Dr. Harry Kaufman to Temple Beth Sholom’s Youth Campaign at http://www.tbsmb.org/youth-campaign. Service will be held at Temple Beth Sholom, 4144 Chase Avenue, Miami Beach on Friday, November 15th at 10:00 a.m. Arrangements by Levitt-Weinstein Blasberg-Rubin-Zilbert Memorial Chapel (305) 932-2700

Dr. Harry Isadore Kaufman, an incredible man who proudly served his country as a Captain and Doctor in World War II, passed away peacefully in his home on Veterans Day, 11/11/2019, at the age of 95. He was a devoted and loving husband to his... View Obituary & Service Information

The family of Dr. Harry Isadore Kaufman created this Life Tributes page to make it easy to share your memories.