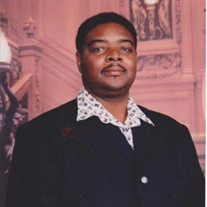 June 24, 1961 was indeed a momentous time heralding the birth of Drexel Ricardo into the union of Levonne and Juanita Moxey (nee Sweeting). He brought much joy to his parents, siblings and extended family, being the third son and 7th child of... View Obituary & Service Information

The family of Drexel Ricardo Moxey created this Life Tributes page to make it easy to share your memories.

Send flowers to the Moxey family.