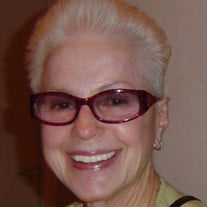 Edith "Edie" Brukenfeld Rudy passed away at the age of 88 on Wednesday, August 12, 2020, in her home. Edie was born on March 15, 1932, to Edward Brukenfeld and Anna Biderman Brukenfeld in Brooklyn, NY. She attended Midwood High School and Manhattan College. Edie lived most of her adult life in Manhattan, until retiring to Aventura, Florida. Edie was a remarkable woman. Beautiful, full of class, poise, and elegance. She was a fearless and cultured businesswoman. She carried a sharp wit. She was hilarious. She was a loving wife, mother, grandmother, and great grandmother. She raised a loving family and leaves behind a legacy for her daughter, and her daughter's children, and their children's children to look up to and carry on. Here's a little bit of her story. Edie met Ed Rudy, the love of her life in 1946. They met as teenagers, riding their bicycles in Brooklyn, NY. They were married for 72 beautiful years and had their two children, Anita and Lonnie. Edie was the owner of the famed, upscale Upper East Side boutique "Pour Moi," which was featured in the academy award-winning movie "Tootsie" by Director, Sydney Pollack, and starred Dustin Hoffman. Pour Moi was frequented by both locals and travelers from abroad for its upscale, classy offerings and warm, European flair for the fashionable. Edie's husband, Ed Rudy, is famous in his own right. Edie was always impressed and fascinated with her husband's resume, which includes top-selling recordings of his interviews with The Beatles, Rolling Stones, Dave Clark Five, and other Rock n' Roll icons. She also loved listening to her husband on "The Beatles Brunch" radio show in southern Florida, where popular radio hosts interviewed him. Edie loved the energy of New York City and thoroughly enjoyed all of the unique and countless activities it offered and the action it exuded. One of her favorite things to do was have weekend brunch at one of her and Ed's favorite restaurants where family and friends often joined them. There is no way to capture the number of ways that Edie fascinated the people around her. She was incredibly immersed in the arts, culture, and had a rich social life. She loved going to the movies and was a film buff by anyone's standard. She loved playing the game Mahjong and would frequently come home the winner. Edie loved traveling with her husband around the globe to faraway places and was often joined by friends and family on their exotic excursions. She was sharp-witted and always up for a new adventure and approached life fearlessly. Edie always shared her learnings about life and the world with the people closest to her. She had a unique perspective on things that was always informative and often hilarious. She had a gift of making her grandchildren and great-grandchildren feel uniquely important and special. Edie's sense of style was inimitable, her experience and advice indispensable, her sense of humor unparalleled, and her laugh unforgettable. Her legacy is one of class, beauty, wit, style, humor, intellect, fearlessness, and endless love. Edie was predeceased by her son Lloyd Ian Rudy and son in law, Richard R. Storr. Edie is survived by her daughter, actress Anita F. Storr, grandchildren, executive producer Samantha R. Storr and nurse Jacqueline R. Storr, and their spouses, actor Bradley J. O'Connor, and entrepreneur and fitness and wellness coach Luiz "Reco" Pontes, and great-grandchildren, Jack Richard O'Connor and Kaleo Rudy Pontes of California. We would like to thank Clovia Satchell, Alma Salazar, Jose Pupo, and Dr. Stacy Roskin, who gave her exemplary care. Private services were held. Arrangements by Levitt-Weinstein Blasberg-Rubin-Zilbert Memorial Chapel (305) 932-2700

Edith "Edie" Brukenfeld Rudy passed away at the age of 88 on Wednesday, August 12, 2020, in her home. Edie was born on March 15, 1932, to Edward Brukenfeld and Anna Biderman Brukenfeld in Brooklyn, NY. She attended Midwood High School and Manhattan... View Obituary & Service Information

The family of Edith "Edie" Brukenfeld Rudy created this Life Tributes page to make it easy to share your memories.

Edith &quot;Edie&quot; Brukenfeld Rudy passed away at the age of 88 on...