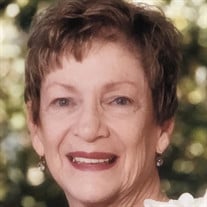 Eileen Solomon Rand, 90, passed peacefully Friday, August 21, 2020, shortly after the Sabbath began. She was surrounded by loving members of her Peoria family. Eileen moved to Grandview Care in Peoria, Illinois, in January 2020 to spend more time with her son, Andrew, and his partner, Sid Ruckriegel. She had many friends from Peoria visit her, much to her delight, especially Sally Snyder. Eileen Solomon was born July 12, 1930, in Brooklyn, New York, to Milton and Evelyn (Goldstein) Solomon. Her family, including brother, Leslie David, moved to Miami Beach, Florida, in the early forties. Eileen graduated from Miami Beach High School in 1948. Many lifelong friends would be from the old neighborhood on Miami Beach. Eileen Solomon attended college before marrying Harold Rose in 1949. Harold “Hal” was a fulltime math and music teacher at Nautilus Middle School, occasionally moonlighting as a musician. Their nine-year marriage was blessed with two children, Hilary Ann and Robin David. Eileen married Jay Milton Rand on August 28, 1959. Jay was a Florida certified public accountant and trusted fiduciary. Eileen and Jay had two children, Andrew Alan and Evelyn Erin. The couple was happily married and best friends for 56 years until Jay passed away in December 2015 in Hollywood, Florida. Eileen’s brother, Leslie David Solomon, also preceded her in death in 1997. Together, Eileen and Jay happily raised all four children; Hilary Ann Rose, Robin David Rose (Karen), Andrew Alan Rand (Sid) and Dr. Evelyn Erin Rand Buzzella. Additionally, seven grandchildren came to fill their hearts; Ericka, Naomi, Micah, Jonathan, Sequoia, Jasmine and Trey; and four beautiful great-grandchildren deepened their joy; Alex, Kylie Anne, Aidan and William. Doxy, Rasputin, Izzy, Aggie and Minnie were her loyal companion animals. Eileen spent many hours volunteering for summer programs at Beth Moshe’s Camp Avir on West Dixie Highway in North Miami. She worked many hours with the Sisterhood raising funds to dedicate a new Beth Moshe in Sans Souci where she served as President of the Sisterhood. Along with her husband, Jay, Eileen was also a dedicated volunteer for United Cerebral Palsy of Miami where together they helped raise funds and awareness for kids with special abilities. Eileen worked 35 years for Dr. Melvin Platt, managing the office and practice. In her spare time, Eileen was a self-taught artist and potter who enjoyed helping her kids exercise their creative genes on the piano, in the studio or attending art shows. Always willing to make kugel for anyone who asked, Eileen loved to cook and spend time in her garden. While Eileen and Jay loved to travel, few things could make them as happy as their lifelong friends, many from Eileen’s childhood living in Miami Beach. Eileen and Jay’s closest friends, and our “aunts” and “uncles”, have been with them nearly their entire lives in South Florida. Eileen’s friends of 75-plus years are Bea Bernstein (Burt), Sylvia Kanner (Benny), (Fran and Paul) Cavari, Bobbie and Don Mendelson, and Seena Kuby-she says 40 years (Jerry). Our families have been made stronger because of their enduring love and friendship. In lieu of flowers, memorials may be made to WTVP-Peoria Public Television, 101 State Street, Peoria, Illinois, 61602.

The family of Eileen Solomon Rand created this Life Tributes page to make it easy to share your memories.

Send flowers to the Rand family.