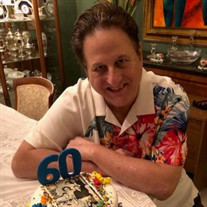 OBITUARY FOR ELI SETH BERENS June 13, 1960 – September 4, 2020 Eli Seth Berens of Hollywood, Florida passed away suddenly of natural causes on September 4, 2020. He was the beloved husband of Joanna Polinsky Berens and proud father to Samuel Gabriel Berens, a junior at the University of Florida. He is also survived by his sister and brother-in-law, Nancy and David Johnson of Pittsburgh, nieces and nephews, Julie Tritt of Miami, Kathleen & Eric Johnson of Pittsburgh and Michael Johnson of New York City, his aunts, Piry Weiss of Melbourne, Australia, Marilyn Goldstein of Boston and numerous cousins from around the world, whom he held close to his heart. He was pre-deceased by his parents, Yolana, a Holocaust survivor and art dealer, and Julius G. Berens, a financial editor and banker, as well as his brother, Marc, and sister, Debra. Born in Manhattan, Eli and his family moved to Miami Beach during its first heyday, the early 1960’s, when Jackie Gleason was at his peak and the glistening resorts of South Florida beckoned all honeymooners and vacationers, as well as retirees. Eli reveled in his idyllic surroundings and was proud to be a 1978 graduate of Miami Beach Senior High School, having spent summers working at several of those beautiful resorts either as a tennis pro, pool boy or kitchen help, where his engaging personality allowed him to meet interesting people from around the globe. After attending Miami-Dade College and Florida International University, Eli followed his passion for food and cooking and began his career in catering, first working in the social catering scene at The Pavillon Hotel Miami (now InterContinental), followed by Gene’s Catering. In 1984, when a little known TV show called “Miami Vice” came to town, Eli was the first to volunteer to take a 2 week vacation so that he could help pioneer what would become a vibrant production and location catering scene in South Florida. He never returned to his regular job and instead launched his company, Commercial Caterers, importing California-customized mobile kitchen catering trucks (now known as food trucks) to create a fleet that would serve the burgeoning TV, film and production scene until the early 1990’s. He would end up working on dozens of films, including “Caddyshack”, “Planes, Trains and Automobiles”, “Cape Fear”, and “Blaze” just to name a few, and would serve as personal chef to numerous stars on location including Don Johnson, Burt Reynolds, John Candy, Paul Newman, Robert Conrad, Lolita Davidovich and many others. In 1993, he launched Mazel at 195th Street, Inc., a company devoted to the ownership and management of commercial real estate. While entrepreneurship was always at the heart of Eli’s passions, his biggest passion was his beloved extended family and long-term friendships, of which he was very proud. He, along with Joanna and Samuel, traveled far and wide to be present at as many occasions as possible, understanding that in the end, what really counts in life are the memories made and the relationships cherished. Eli will be buried on September 9, 2020 at the Berens Family Grave at Mount Ararat Cemetery on Long Island, NY. Memorial donations may be made to either the US Holocaust Memorial Museum (www.ushmm.org), Mazon (www.mazon.org) or Temple Solel of Hollywood (templesolel.com). Please click the following link to the view the Zoom service recording https://viewneral.zoom.us/rec/play/YktdR1f-M565iov06ESFLe-Xo4x5S_xUuH-LDioOCMs_XpXIft_EDCKQome5lLV0qJ5B-O8mKz2iXt4h.D8FvcUEkIgTYYcmZ Thank You

The family of Eli Seth Berens created this Life Tributes page to make it easy to share your memories.