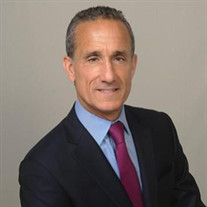 Evan Jared Reed, a dynamo in the Miami business and art community, passed away Sunday evening at age 60. Born and raised in Danbury, Connecticut, Evan developed a sense of passion and adventure that he carried throughout his life. It began as a child with his weekend trips to Vermont and winter trips to visit family in Austria, which helped shape his love for skiing and travel. Evan’s determination and drive, coupled with a tireless work ethic, also led him to be an academic star. He attended and graduated from Denison University majoring in economics and art history, with honors. After Evan graduated from Denison, he moved to New York City to pursue his business career, beginning at Citibank. It was there that he met his life partner and best friend, Stefanie Block, who herself moved to New York to pursue her career in art. Evan, with his thirst for knowledge and culture, shared Stefanie’s love for art—a love that ultimately shaped their lives together. They married in January 1989. While continuing to work for Citibank, Evan’s devotion and brilliance gained him acceptance to Columbia University where he received his MBA. After living, working, and studying in New York for nearly a decade, Evan and Stefanie moved to Miami, Stefanie’s hometown, where Evan took his business knowledge to Surrey’s, Inc., a Miami-based menswear company. After several years at Surrey’s, Evan took a position with Bank of America’s private wealth department, where he built his marked career for 23 years. It was at Bank of America that Evan became a leading figure in the Miami business and art community, carving out his own path in which he helped his clients achieve their business goals while also exploring their own love of art. He was a pioneer in the art lending field, among a handful who created a new category of banking. Throughout his career, Evan gained the respect of all who met him for his professionalism, intellect, and kindness, not to mention his dapper fashion-sense. Despite Evan’s success, he remained modest and treated everyone with compassion and care. While Evan’s professional accomplishments were remarkable, his most notable accomplishments were personal. Above all else, Evan was a devoted family man whose greatest joy came from Stefanie, and his two children, Andrew and Rebecca. He adored them, and he instilled in them the same zeal for art, skiing, tennis, and travel. They traversed the globe as a unit, planning trips that combined all their interests. Evan’s life was never boring. He also imparted in Rebecca and Andrew the work ethic needed to find their own success in life. As anyone who knew him will attest, Evan was kind and generous. He always had an ear to lend whether the issue was big or small; about life or business; or whether you were his closest confidant or an acquaintance. He also was great with kids, shedding his own concerns at a moment’s notice to entertain and brighten their day. Evan cared about the world. His generosity extended to total strangers and those in need. Evan constantly updated himself on world events, reading the New York Times, Wall Street Journal, and The Economist daily and ensuring he was in the know on the latest cultural happenings and fashion trends—a spirited interest that bonded him and Rebecca. Evan was a first-class gentleman who held open any door, of course, always for Stefanie. Evan was a dedicated member of the community, a testament to his pride and adoption of Miami as home. He was on the board of the Institute of Contemporary Art, Miami and the Miami Children’s Museum. You might imagine that Evan did not have time to take care of himself. He still found a way. Evan’s diligence and commitment inspired him to wake up at 4:30 A.M. everyday to get in a workout. In fact, Evan’s fitness level was so pristine that he was able to complete three marathons. Evan also maintained a sharp tennis game; it took Andrew nearly twenty years to finally beat him. A committed father, husband, brother, uncle, family-man, and colleague, Evan will be dearly missed. He is survived by his wife Stefanie, his children Andrew and Rebecca, his brother Glenn, sister Claudia, father-in-law Michael Block, his wife Alice Jay, sister-in-law Alisa Block, nephews Charlie and Sam, and nieces Nikki, Maia, Lea, Davi, and Kayla, among myriad other family and friends that Evan loved tremendously. In lieu of flowers, Stefanie, Andrew, and Rebecca ask that you make a donation to the Miami Cancer Institute and/or Lotus House in Evan’s name. Service 10:30 am Wednesday, May 12, 2021 at Temple Judea, 5500 Granada Boulevard, Coral Gables, FL 33146. Arranged by Levitt Weinstein Blasberg Rubin Zilbert (305) 932-2700.

Evan Jared Reed, a dynamo in the Miami business and art community, passed away Sunday evening at age 60. Born and raised in Danbury, Connecticut, Evan developed a sense of passion and adventure that he carried throughout his life. It began as... View Obituary & Service Information

The family of Evan Jared Reed created this Life Tributes page to make it easy to share your memories.

Evan Jared Reed, a dynamo in the Miami business and art community,...

Send flowers to the Reed family.