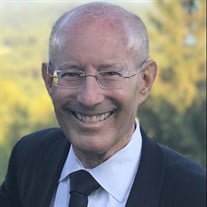 Frank Jay Pearl, MD loved life. He chose to live his best life every day, well before his health challenges. And even after his pancreatic cancer diagnosis fourteen years ago, he never took his foot off the pedal. His calendar was overbooked months in advance with plans with family and friends. He is a true testament to the power of optimism, the importance of community, and the beauty of finding joy in everyday living. His world centered around his wife Sue, his teenage sweetheart, who he absolutely adored. He felt lucky to have her every day of his life. He was a devoted and proud father of two girls, Stephanie and Jodie, for whom he provided unconditional support. He cherished his sister Jane and his grandchildren Reuben, Raya, Madelyn, and Jack. He loved being a cardiologist and worked until his health would no longer allow. He considered it a great privilege and joy to practice medicine. Sports, food, and wine were a cornerstone of life and family events. He was a loyal Miami sports fan, never missing a Dolphins or Heat game. Dinner reservations were made six months in advance. Life was always full, even when things got hard. He took advantage of every opportunity to celebrate. Frank is survived by his wife Sue, his daughters Stephanie Pearl (Marc Cusa) and Jodie Dvorkin (Joe Dvorkin), his sister Jane Pearl (Michael Barr), his four beautiful grandchildren Reuben, Raya, Madelyn, and Jack. He is also survived by an incredible community of friends who he considered family from Miami, Philadelphia, New York, and elsewhere that made his life so wonderful. His family is filled with gratitude for the time they shared with him and for the support they have received throughout this journey. They are grateful for his amazing care teams at University of Miami/Jackson Memorial Hospital, his care teams and family at Memorial Regional Hospital where he worked for almost 40 years, and most especially Dr. Joe Levi and Dr. Bernie Shair. Donations can be sent to the Pancreatic Cancer Action Network, www.pancan.org, Jackson Health Foundation, www.jacksonhealthfoundation.org/donate, or the Memorial Foundation, www.mhs.net/about/foundation The funeral will be held at Levitt-Weinstein (3201 North 72nd Ave, Hollywood, FL) on Tuesday, April 27th at 11:30am. Participation can also be through Zoom: Viewer ID 961 9865 6385, Passcode 920774 OR Call-in 669-219-2599, ID: 961 9865 6385. Shiva Link: https://www.signupgenius.com/go/20F0844ABAC2AA1F49-pearl Arrangements by Levitt-Weinstein Blasberg-Rubin-Zilbert Memorial Chapel (305)932-2700

Frank Jay Pearl, MD loved life. He chose to live his best life every day, well before his health challenges. And even after his pancreatic cancer diagnosis fourteen years ago, he never took his foot off the pedal. His calendar was overbooked... View Obituary & Service Information

The family of Frank Jay Pearl MD created this Life Tributes page to make it easy to share your memories.