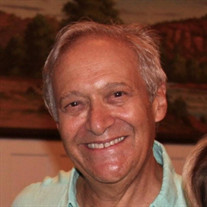 HERSHDORFER, Gary Allen It is with sadness that the family of Gary Allen Hershdorfer announces his sudden passing due to heart attack at age 81 on October 28, 2020 in Aventura, Florida. Gary was born in New York City on November 30, 1938 to Symie and Benjamin Hershdorfer. He grew up in Syracuse, NY and graduated from Nottingham High in 1956. He earned a BA in history from Columbia University in 1960, then spent several years as an officer in the Navy aboard the aircraft carrier USS Franklin D Roosevelt. He obtained his Master’s in Economics from the University of California, Berkeley, where he met his former wife Marilyn Hershdorfer. They lived in Berkeley for 30 years, while Gary worked for the US Army Corps of Engineers in San Francisco as Chief Economist. He transferred to the Corp's New York office in 1996, where he retired as the Chief Economist of the North Atlantic Division. In 2002, he moved to Florida with his partner Phyllis Salzman. Gary was an avid skier, and not even knee and hip surgeries got in the way of his annual trips to Vail. He played tennis in college and beyond, practiced yoga for decades and most recently threw himself into golf. Friends and family will miss his wit, his dapper style, and his annual holiday newsletters, which were often accompanied by political commentary and hand drawn illustrations. Some of his paintings can be found framed in his daughter’s homes. Gary is survived by his daughter Alexandra Colacito, who resides in North Attleboro, MA with her husband Mark and son Milo; his daughter Mary Hershdorfer, who resides in Bishop, CA with her husband John Hays Jr. and their daughters Amaya and Hazel; and his brother Victor Hershdorfer, who resides in Syracuse, NY with his wife Celaine. Donations can be made to The Columbia College Fund (https://www.college.columbia.edu/alumni/columbia-college-fund) or the Metropolitan Museum of Art (https://rsecure.metmuseum.org/donate) A service will be held in North Miami Beach, Florida on Sunday, November 15, 2020 at 2:00 pm EST. To attend via Zoom, please contact [email protected] Arrangement by Levitt-Weinstein Blasberg-Rubin-Zilbert (305) 932-2700

HERSHDORFER, Gary Allen It is with sadness that the family of Gary Allen Hershdorfer announces his sudden passing due to heart attack at age 81 on October 28, 2020 in Aventura, Florida. Gary was born in New York City on November 30, 1938 to... View Obituary & Service Information

The family of Gary Allen Hershdorfer created this Life Tributes page to make it easy to share your memories.

HERSHDORFER, Gary Allen
It is with sadness that the family of...