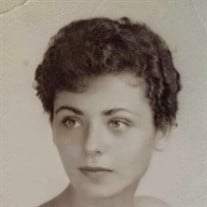 Gloria Fay Korenblit Steckler of North Miami Beach, beloved daughter, sister, wife, mother and grandmother was born in Manila, Philippines on May 20th, 1941. She survived Covid-19 but from there on, it was a day to day situation. She passed peacefully on January 25th, 2021 and is preceded in death by her husband Alan Steckler, father Jack I. Korenblit, mother Paula Korenblit and brother Gilbert M. Korenblit. Her parents, who were Polish Jews, fled the Nazis in 1939 for the Philippines. Gloria and her parents were POWs at Santo Tomás from 1942-1945. At the end of WWII, realizing that nearly all of their family perished back in Lublin, they decided to emigrate to The US. For a couple of years they lived in North Bergen, NJ just a few miles away from where her future husband Alan grew up in Rockland County, NY. Some years later, the family moved once again and settled in Miami, FL. Gloria was a stunning young woman with dark brown hair and deep blue eyes. She had a love of orchids, all plants (especially flowers) and fruit trees. She attended the University of Miami in Coral Gables as a botany major. But during the course of her studies, her mother became ill and she dropped everything to return home and take care of her. One summer, Gloria took a trip to NYC. Her Aunt Lil had gotten her a ticket to be in the audience for The Jack Paar Show. Each audience member was asked to submit a question to Mr. Paar. He then would announce the audience member by name and ask them to stand for the camera. He chose Gloria’s question but when he announced her name, she was camera shy. She returned to Miami Beach where she became a volunteer as a candy striper at Mount Sinai Hospital and it was there that she met her husband Alan who was as a pharmacist. Gloria and Alan were married in 1963 at The Deauville Hotel and settled in the Uleta area of North Miami Beach. She became involved with national charitable organizations and local groups such as the North-Dade Orchid Club which met at the former Washington Federal where she won numerous awards for cultivating orchids. Gloria was an avid bowler, loved swimming and tennis, painted ceramics, dabbled in floral design and was a hatha yoga enthusiast. She took great pride in witnessing the bounties of her fruit trees and winter tomato gardens. In fact, whenever her parents drove down to visit from Cocoa Beach, the very first thing they would all do is run to the backyard for a grand tour and harvest. Gloria overcame countless obstacles in her life and persisted with a fighting spirit through each and every one. She was devoted to and cared deeply for her beloved family, friends and neighbors. Before her nursing facility entered lockdown, close friends continued to visit with her. We are appreciative and thankful to all who continued to ask about Gloria and pray for her. We are grateful to everyone at Claridge House whose nurses, caregivers and staff became Gloria’s extended family. A special thank you particularly to Elijah, Beverly and MaryAnn who helped facilitate video calls. Vitas Hospice was with Gloria and her family every step of the way. Thank you for taking care of our mother. Each of us felt her spirit when she would insist that everyone call her Mrs. Gloria Fay. She would tell caregivers and fellow residents openly that she loved them. In lieu of flowers, we kindly ask to please donate by planting a tree in Gloria’s memory through alivingtribute.org or to the Asthma and Allergy Foundation of America. We love you Mom and you are forever in our hearts. Gloria is survived by her son Steven, daughter-in-law Robin, granddaughters Jordan and Jessica, daughter Rachel, son-in-law Denis, grandson Julian, sister-in-law Myra and nieces Lisa, Tammy and Shana. Graveside Service will be held on Friday, January 29, 2021 at 10:00 a.m. at Mount Sinai Memorial Park Cemetery. Arrangements by Levitt-Weinstein Blasberg-Rubin-Zilbert Memorial Chapel (305) 932-2700

Gloria Fay Korenblit Steckler of North Miami Beach, beloved daughter, sister, wife, mother and grandmother was born in Manila, Philippines on May 20th, 1941. She survived Covid-19 but from there on, it was a day to day situation. She passed... View Obituary & Service Information

The family of Gloria Fay Korenblit Steckler created this Life Tributes page to make it easy to share your memories.