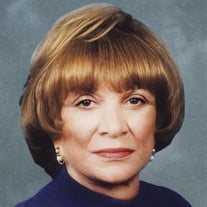 Gwen Margolis (nee Liedman) of Aventura, FL, previously of Miami, North Miami, and North Miami Beach, Florida, died peacefully in her sleep on June 9, 2020 in Aventura after several years of declining health. She was 85. Born to the late Joseph and Rose Liedman, on October 4, 1934 in Philadelphia, PA, she grew up in Philadelphia with her brother Stephen, graduated from Overbrook High School and attended Temple University. She married Allan B. Margolis at the age of 18, and together they had four children; Edward, Ira, Karen and Robin. She moved with her family to Miami in 1960, making an early successful career in Real Estate. With a growing interest in politics in the late 60’s and early 70’s, she began working on other people’s campaigns. Motivated by the women’s movement and confident in her own abilities as a savvy businesswoman comfortable in a man’s world, Gwen ran for and won a seat representing North Miami in the Florida Legislature in 1974. She set high goals for herself in the legislature, determined to learn all she could about taxes and finance, with an eye toward one day controlling those levers. After three terms in the House of Representatives, she successfully ran for the State Senate in 1980, rising to the powerful position of Chair of the Appropriations Committee. In 1990, she was sworn in as the Senate President of the State of Florida, a position that she held for two years, until 1992. She was a trailblazer, as the first elected woman president of any state senate in the country. With twelve years in the Florida Senate, followed by nearly ten years as a Miami-Dade County Commissioner, six of them as Commission Chair, she was elected once again to the Florida Senate, and served there in the years 2002 to 2008, and 2010 to 2016, when she retired. In 2013, she was named “dean” of the Senate by her colleagues, in recognition of her being the Senate’s longest serving member. Over her long political career of more than 40 years, Gwen Margolis put her intelligence, drive, passion for social justice, her power of persuasion and ability to work across the aisle, toward advancing better government and also to improving the lives of her many constituents. While President of the Florida Senate, she successfully spearheaded two groundbreaking reforms; The Sunshine Amendment of 1992, leading to constitutionally mandated open meetings and open records in Florida, and the passage of strong ethics legislation. She was an avid supporter of the arts, public education, and the removal of barriers to voting. In her career, she advocated legislation to support women and disadvantaged communities. Under her leadership on the Miami-Dade County Commission, she oversaw the passage of long-awaited historic legislation in 1998, banning discrimination on the basis of sexual orientation, turning the tide against hurt and hate. Senator Gwen Margolis, was inducted into the Florida Women’s Hall of Fame in 2009, which acknowledged her many fine achievements and her place in Florida history. Over her four decades long career, she received many awards and recognitions. She was honored at the National Conference of State Legislatures with the 2012 Public Leadership in the Arts Award. Other awards include the “Glass Ceiling” award from the Florida Federation of Business and Professional Women, and the Florida Chamber of Commerce “Legislator of the Year” award. Beyond politics and her work, she was a strong family person. She enjoyed spending time with her children, grandchildren, and extended family, and reveled in family gatherings and celebrations. She loved casinos and cruises, and traveling across the world. She had dear friends, many from her political endeavors, but also lifelong friends from childhood. Gwen loved Miami. She was a loyal fan of the Miami Dolphins for over 50 years. She enjoyed the arts and theater, and being part of a vibrant Jewish community. She was a bright life force. Senator Gwen Margolis is survived by her four children, Edward (Deborah) of Hallandale Beach, Ira (Cyndie) of Cumming, GA, Karen (Victor Nussbaum) of Framingham, MA and Robin (David) Stidham of Westlake Village, CA, as well as her beloved grandchildren, Sarah and Jeffrey (MiYoung) Margolis, Jordan and Ariel Stidham, and Leah, Daniel and Jared Nussbaum, and her dear brother and sister-in-law, Yale Stephen and Marilyn Liedman. A funeral service will be live-streamed for family and friends. The service can be accessed by the larger community via a livestream as follows: Gwen Margolis Funeral Service June 10, 2020 11:00 AM Eastern Time Facebook Live: Click: beth torah benny rok campus https://www.facebook.com/beth.torah/ Interment will be private. Contributions in her memory may be made to the Greater Miami Jewish Federation www.jewishmiami.org, Miami Lighthouse for the Blind miamilighthouse.org, Beth Torah (Benny Rok Campus) www.btbrc.org, Feeding South Florida www.feedingsouth.org, or a charity of your choice. Arrangements by Levitt-Weinstein Blasberg-Rubin-Zilbert Memorial Chapel (305) 932-2700

Gwen Margolis (nee Liedman) of Aventura, FL, previously of Miami, North Miami, and North Miami Beach, Florida, died peacefully in her sleep on June 9, 2020 in Aventura after several years of declining health. She was 85. Born to the late Joseph... View Obituary & Service Information

The family of Gwen Margolis created this Life Tributes page to make it easy to share your memories.