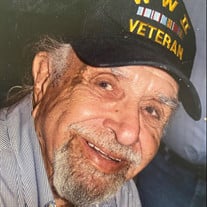 Harold Faiber passed away on August 28th, 2021, in Miami, Florida surrounded by his family. Harold was pushing 98 years old and will finally be reunited with his “Old Sweetie” and love of his life, Ruthie. Harold is survived by his son, Mark Faiber (Fran), daughter Suzanne Faiber Schulman, grandchildren Justin Faiber (Melissa), Elana Schulman, Alyson Rood (Theodore), Gillian Schulman and his last and most favorite girlfriend, his great granddaughter, Stevie Ruth. Harold was born December 15th 1923, in The Bronx, New York to Max and Fannie Faiber. He had an older brother Saul who was killed in Italy during WWII. Harold was in the Army Air Corp and served in WWII stationed in the Pacific for 4 years as part of a special liberation bombardment group, Kelly’s Cobra’s, as an aircraft machinist. Harold returned to New York after his time in the service where he met and married Ruth Schwartz on June 14th 1947. Harold and Ruth lived in Queens where they raised their son and daughter, Mark and Suzanne, until moving to Miami, Florida in 1971. Harold held two degrees in education and industrial engineering. He taught industrial arts in Miami and was the proud owner of Harold’s Sewing Machines where he was a sewing machine mechanic and machinist known around the world until his passing. Harold is famous for his trucker hats, ponytail, western belt buckles and driving around in his red convertible smoking cigars listening to big band music. He was a regular at the hottest spots in South Florida including Dunkin’ Donuts and Panera Bread in Hallandale where he met his cronies every day for breakfast for over three decades. He loved dancing, fishing, sharing stories of the war, telling jokes, and most of all - his family. He was one of a kind and will be missed by many. A graveside funeral service will be held on Monday, August 30th at 11:30AM at Beth David Memorial Gardens, 3201 N 72nd Avenue, Hollywood, FL 33024. Under the directions of Levitt-Weinstein Blasberg-Rubin-Zilbert Memorial Chapel (305) 932-2700 The eagle has finally landed, and he did it his way.

Harold Faiber passed away on August 28th, 2021, in Miami, Florida surrounded by his family. Harold was pushing 98 years old and will finally be reunited with his &#8220;Old Sweetie&#8221; and love of his life, Ruthie. Harold is survived by... View Obituary & Service Information

The family of Harold Faiber created this Life Tributes page to make it easy to share your memories.