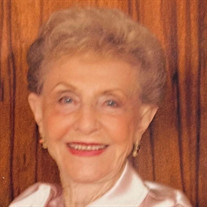 Harriet Sterling passed away peacefully in her sleep on Tuesday, October 26th. She is survived by her three children: Jeffrey (Moni) Cohen, Roni (Meyer) Liberman, and Lewis (Holly) Cohen, and five grandchildren: Lauren Cohen, Phillip Cohen, Elyse Liberman, Jason Cohen, and Jessica Cohen. Harriet was born in Brooklyn, New York. She attended school in New York, where she met her first husband, William Cohen. In 1957, the young couple moved to Miami Beach where they settled down and raised their children. Nothing was more important to Harriet than her children, her two older sisters, Lee and Jay, and her dog Lance. When thinking of Harriet, many will remember the sight of her beloved miniature poodle, Lance, constantly by her side. She was an avid golfer and a voracious reader. Later in life, she met and married Bernard Sterling. As a couple, they loved nothing more than travelling the world together. Harriet lived a long and fulfilled life and was deeply loved by her family and all who knew her. The family requests donations in memory of Harriet Sterling be made to The American Macular Degeneration Foundation, www.macular.org Cryptside Service Thursday, October 28, 2021 at1:30 p.m. at Beth David Memorial Gardens. 3201 N 72nd Avenue, Hollywood, Florida. Arrangements by Levitt-Weinstein Blasberg-Rubin-Zilbert Memorial Chapel (305) 932-2700

The family of Harriet Sterling created this Life Tributes page to make it easy to share your memories.

Harriet Sterling passed away peacefully in her sleep on Tuesday,...