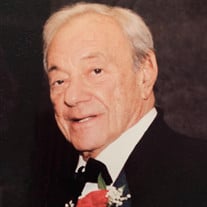 Herman (Hy) Singer, 94, of Sunny Isles Beach, Florida, passed away peacefully at home surrounded by loved ones on February 9, 2021, after valiant fights against many illnesses. Hy was born in 1926 on the Lower East Side of New York City, the son of Samuel and Anna, immigrants from Poland. He was raised in a tenement flat during the Great Depression, along with three brothers and a sister. Hy attended Mesivtha Tifereth Jerusalem (MTJ) in Manhattan, and later studied at Yeshiva University for a year before joining the United States Army during World War II. In 1947, with $300, Singer founded Allied Textiles, a reprocessing company in Manhattan's Garment District. After nearly two decades of savings from selling textile clippings for mere cents on the pound, Hy purchased an amusement ride in the Coney Island area of Brooklyn. Through hard work into his eighties, Singer became a successful real estate investor in and advocate for the revitalization of the amusement district. Hy’s role in ownership and lease partnerships in historic attractions along the Boardwalk and Cyclone, Tornado, and Bobsled roller coasters made him an integral part of the fabric of Coney Island. A part-time resident of Miami Beach for many years, during the 1970s, Hy was a partner in and active manager of the food, beverage, yacht club, and cabana operations at the Fontainebleau Hotel in Miami Beach. His community leadership included roles as Vice President of the Coney Island Chamber of Commerce and a local Republican Party official. In 2001, Singer was elected as Chairman of the Republican Party of Kings County and served for six years. After retiring, he was an active congregant and supporter of the Young Israel of Sunny Isles Beach. Hy was the most loving father to and is survived by his children, Ann, a retired American Airlines 777 captain and check pilot; Scott (Bella), the Mayor of Boca Raton and a business lawyer; and his grandchildren Daniel and Rachel. He is also survived by his longtime companion, Shelley Heitzner; her children Michael (Allison) and Lori (Seth) Fishman, to whom he was a father figure; her grandchildren Jake, Sabrina, Lexie, and Brooke; as well as niece Frané Lessac, nephew Michael Lessack, and dear longtime friends Eliot Nachman and Dr. David Kayden. He was predeceased by four siblings and his former wives, Jean Singer Sanders and Renee Singer. Hy was an ardent supporter of Jewish causes and many charities, including New Brighton Jewish Center, where he was former president and chairman; Young Israel, whose national organization named him Man of the Year in 2011; and MTJ, which honored him for his ongoing philanthropy. His legacy of love, leadership, hard work, kindness, and generosity touched countless lives. The family is grateful to care provided in his last few years by Dr. Jay Reinberg, Mernica Beckford, Madge McKnight, Claudette Traill, Nathalie St. Joy, Joan Pottinger, Melissa Blake, Tracy-Ann Williams, and many other caregivers. Private memorial services will be held at Beth David Memorial Gardens, Hollywood, Florida. In lieu of flowers, contributions in his honor can be made to Young Israel of Sunny Isles Beach at youngisraelsib.com or to any charity of choice. Arrangements by Levitt-Weinstein Blasberg-Rubin-Zilbert Memorial Chapel (305) 932-2700, Online guestbook at levitt-weinstein.com.

Herman (Hy) Singer, 94, of Sunny Isles Beach, Florida, passed away peacefully at home surrounded by loved ones on February 9, 2021, after valiant fights against many illnesses. Hy was born in 1926 on the Lower East Side of New York City, the... View Obituary & Service Information

The family of Herman "Hy" Singer created this Life Tributes page to make it easy to share your memories.