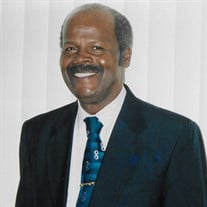 Irving Cooper, Sr. was born on January 1, 1941 to the late Eddie and Sylvia Cooper in Darien, Georgia. He passed away on January 8, 2021 at Jackson North Memorial Hospital. Irving Cooper graduated from Todd-Grant High School in Darien, Georgia in 1960. He held the office of class Treasurer and was voted “Best Dancer” in school. After he graduated from high school, he moved to Miami where he worked several jobs during the week and weekends. Eventually, in 1961, he started working at a company called, “Associated Grocers of Florida Incorporated.” When his father died in 1963 in Darien, Georgia, while there, he fell in love with one of his former dance partners, Bertha Mae Moore, and on September 04, 1965, they were married. He moved his wife to Miami, Florida and started a family. Irving and his wife raised 3 sons: Irving B. Cooper Jr., Kelvin B. Cooper, and Dwayne B. Cooper. Eventually, he worked his way up to warehouse supervisor. In total, he worked at Associated Grocers for 42 years before retiring. He truly enjoyed working so much, that after retirement, he went back to work as a crossing guard at the school in front of his house. He still would have been there if he did not get sick with double pneumonia which was the beginning to his end. One of the things Irving was known for was baking a friendship cake for his family and the friends at the Kingdom Hall. He loved to make it so others can enjoy it. He practiced the principle at Acts 20:35 that it is better to give than to receive. He loved his family and attended almost every family reunion. He also was the treasurer of the Cooper Family Reunion for decades before handing it over to another family member. One thing can be said about Irving is that he was a hard-working and honest man. He knew the value of saving money and making a dollar stretch. He was responsible and took care of our family. He will always be remembered and respected for that. Irving Cooper is survived by his wife: Bertha Cooper, his 3 sons: Irving B. Cooper Jr, Kelvin B. Cooper, and Dwayne B. Cooper; daughter-in-laws: Elaine Cooper and Conseulo Cooper; grandchildren: Antonio Cooper, Jared & Janae Cooper; 1 great grandson: Antonio Cooper Jr; older brother: Albert Cooper & his wife (Elnora); best friend: James Hall and many other nieces and nephews, relatives and friends. Chapel Service will be held on Friday, January 22, 2021 from 3:00 pm - 5:00 pm at Levitt-Weinstein Blasberg-Rubin-Zilbert Memorial Chapel, 18840 West Dixie Highway, North Miami Beach, Florida 33180 (305) 932-2700

The family of Irving Cooper Sr. created this Life Tributes page to make it easy to share your memories.

Send flowers to the Cooper family.