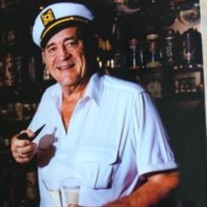 Irving Miller of Miami Beach, Florida passed away on Monday, March 16, 2020. He was born in New Bedford, Massachusetts on August 10, 1926. He was the second son of Jack and Ida Miller. His father ran a grocery store and his mother was a local real estate investor. Irving graduated from New Bedford High School, Brown University and Boston University Law School. He proudly served in the US Army Air Core as a navigator. It was after spending a Spring break holiday with his fraternity brothers at the Boca Raton Hotel that Irving decided when he was finished with his education, he would move to South Florida. With his bride Shirley, they made Miami Beach their home and raised five children in a house he built on Sunset Island. He was later joined by his brothers Harold and Leonard and their wives Bobbye and Sue and mother. The three brothers would remain very close throughout their lives while they became active businessmen and community and philanthropic leaders. Irving Miller was a brilliant and hard-working businessman. He started by brokering tracts of land and eventually moved into many areas of real estate including hotel/motel, housing, and subdivision development. He was close associates with some of the biggest titans in the real estate industry. He was a business mentor to so many and loved to “hold court” in his 1970’s decorated office while providing advice and unbelievable stories about his career. He had many friends from all walks of life. Irving’s first priority was his family, then friends and business. For recreation he enjoyed playing golf daily either at nearby Bayshore or Westview Country Club where he was a member for 50+ years. Irving also loved hosting his brothers and their families at his home on weekends and for holidays. Friday night dinners and Sunday boating and tennis were regularly attended by many. Irving developed a love for antique shopping during his visits to New York. His mother had given him a beer stein as a graduation gift, and he went on to build one of the most respected collectors of Beer Steins in the world. Irving was truly dedicated to his extensive family and was preceded in death by his wife of 45 years Shirley, his beloved brothers Leonard and Harold, and his sister-in-law Sue Miller. He is survived by Amalia Miller, an incredible love of his life for the past 20 years, and his sister-in-law Bobbye Miller. He was a loving father of Sherri Gersten (Judge David), Michelle Miller, Renee Simmons, Cary Caster (Richard) and Roger Miller (Jana) and step-father to Lior Lesser (Teva), William Weinraub (Nicole), and Lilach Jackson (Michael). He was a cherished Beepa of Jennah Caster, Barron Caster (Melanie), Lana Caster, Adam Gersten, Michael Gersten (Maia), Lisa Gersten (Rick Freud), Jonathan Gersten (Lexi), Daniel Goldstein (Amy), Aaron Goldstein, Jacob Miller (Fanny), Spencer Miller, Brooke Miller, Zachary Miller and Kelli Miller, Chelsey Simmons (Bill White), Cody Simmons, Casey Simmons, and step-grandfather to David Jackson, Nicole Lesser, Jack Lesser, Max Lesser, Ryan Lesser, Victoria Weinraub, and Kevin Weinraub. He was also loving great-grandfather to Jonah Freud, Isaac Freud, Shirley Freud, Gigi Gersten, Goldie Gersten, Miles Gersten, Morris Gersten, Noah Harvey Goldstein, Leila Goldstein, Sara Goldstein, Stephanie Goldstein, and Charlee White. Due to the coronavirus, the service was limited to immediate family. Donations in his memory can be made to The First Tee (www.firsttee.org). Arrangements by Levitt-Weinstein Blasberg-Rubin Zilbert Memorial Chapel (305) 932-2700

Irving Miller of Miami Beach, Florida passed away on Monday, March 16, 2020. He was born in New Bedford, Massachusetts on August 10, 1926. He was the second son of Jack and Ida Miller. His father ran a grocery store and his mother was a local... View Obituary & Service Information

The family of Irving Miller created this Life Tributes page to make it easy to share your memories.

Irving Miller of Miami Beach, Florida passed away on Monday,...