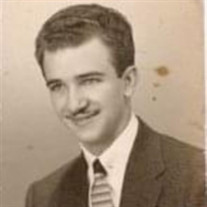 Isaac Tacher A resident of Pembroke Pines, Isaac Tacher passed away on August 31, 2020. He was the beloved husband of Carmen Tacher and loving father to Robert Tacher and Dolly Tacher and Wilma Cordoves and Frank Cordoves. Isaac was the adored grandfather to Brandon and Bryan Cordoves and Gabriella Tacher. He was truly cherished by his brothers and sister Albert, Isidoro, Daniel, Virginia, Victor, Luis and Jacob along with their wives, husbands, and children. He was a loyal and eternal friend to many. Isaac, lovingly known as Caco, was born in Regla, Cuba on October 2, 1935. He left Cuba to join his brothers in New York at the young age of 18. It was in New York where he met the love of his life Carmen. They had two beautiful children and all moved to Rio Piedras, Puerto Rico to join some of his other brothers. While in Puerto Rico he opened his own jewelry store and worked tirelessly to support his family. He and his family left Puerto Rico in 1980 to enjoy his retirement years In South Florida. Isaac loved to sing, dance, and make people laugh. His beautiful blue eyes, easy smile, and cheerful demeanor left a lasting impression among anyone who met him. He loved life and he loved having his family and friends so close to him. He spent countless hours with all his brothers and sister singing and preparing for their special karaoke nights. When not singing the night away, you would find him playing dominos with his brothers. He loved every minute and every second he could spend with them. He was devoted to his children and grandchildren and loved to have Sunday night dinners. He was always there to lend an ear and give the best advice. Isaac will always be remembered as the loving husband, father, brother, grandfather, uncle, and friend. He will forever live in our hearts. Thank you for all the memories. We will miss you Caco, Dad, Abu, Uncle.

Isaac Tacher A resident of Pembroke Pines, Isaac Tacher passed away on August 31, 2020. He was the beloved husband of Carmen Tacher and loving father to Robert Tacher and Dolly Tacher and Wilma Cordoves and Frank Cordoves. Isaac was the adored... View Obituary & Service Information

The family of Isaac Tacher created this Life Tributes page to make it easy to share your memories.

Send flowers to the Tacher family.