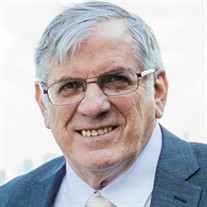 Jerome “Jerry” Kowalsky July 3, 1946 to May 10, 2022 Jerome “Jerry” Kowalsky was born July 3, 1946, at Lenox Hill Hospital in New York, New York. Growing up in New York, Jerry attended Brooklyn Tech and City College before leaving for the Marines in 1965 to serve two tours in Viet Nam. Returning to New York in 1968, he earned his Bachelor’s Degree in Electrical Engineering from City College and his MBA from Baruch College. Over the years, he had a variety of sales and management positions, but worked for almost 30 years as office manager for Boulevard Title of South Florida and his wife’s law office in Hollywood, FL. He was quick to tell you that his proudest accomplishments were his four children: Daniel, Julie, James and Jon, and in remembering him, they describe him as “Fun Dad” and “Fun Uncle” to their cousins. While you knew he was the man in charge, he was also the most generous and loving man, and the most loyal friend. Jerry’s favorite pasttime was poker in later years, although he is remembered fondly by family and friends for trips to Vegas, cruises to Nowhere and nights at Jai-Alai. He was happiest when he was sharing meals with friends and family. Preceded in death by his parents, Daniel and Estelle Lapp Kowalsky, he is survived by his sister, Francine (Larry) Bober, his wife Debbie, his children, Daniel (Shannon) Kowalsky, Julie (Kevin) Corbett, James (Susie) Kowalsky, Jon (Jenelle) Kowalsky, and seven grandchildren, Katie, Eily and Nathan Corbett and Abby, Aria, Davina and Eliza Kowalsky. In lieu of flowers, the family asks that donations be made to the Humane Society of South Broward where Jerry volunteered for many years. Humane Society of Broward County 2070 Griffin Road Fort Lauderdale, FL 33312 Pleased follow the link below to the live funeral service: https://www.shiva.com/join-viewneral?jc=10000:sVlRQAMY7B+puXcDGGLsifz0SRSVlUWu:9Pnz0cPFpC32KZRCpG3S3w==:8Mnjwz7wVS27mne1SxCxpw==

The family of Jerome Kowalsky created this Life Tributes page to make it easy to share your memories.