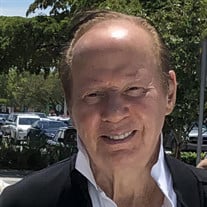 Jerome Stuart Mann was born in Margate, New Jersey and was raised in New York. A talented and gregarious personality, Jerome was always the center of attention, sharing a story or a new joke even before a greeting. As a boy he always loved baseball. He played throughout his childhood and was scouted by the Phillies but injured his kneecap during practice season before he was able to play professionally. After prep school, he served in the Army in Stuttgart, Germany where he won an International scholarship to study Opera. This began his second love, and musical career. Jerome received a degree from the Juilliard School of Music before matriculating to Columbia University and receiving a master’s degree in Opera. He performed in Cosi Fan Tutti at the Metropolitan Opera Studio, as well as John Houseman’s American Opera Theater. Jerome’s roles in the grand opening of The New York State Theatre’s productions of The King And I, The Merry Widow, and The Most Happy Fella spearheaded his career on Broadway in productions of A Joyful Noise, and No for An Answer. But it was in Fiddler on The Roof where his career blossomed as he met his wife and musical partner of 48 years. They formed the musical duo, ‘Donna and Mann’, performing together on luxury cruise lines, hotels, & resorts, throughout the world. The couple moved to Florida and began producing cultural shows and musical theater festivals. Jerome’s love of theater, music and children were the inspiration of their company ‘Say It with Music’, which was formed to bring music and theater into the Florida school system. Jerome also taught as a guest artist in residence at The New World School of the Arts. Working as the Entertainment Director for The Marco Polo Hotel—now the Ramada Plaza Marco Polo, Jerome produced many shows, but the highlight of his producing career was managing the very talented singing group The New York Vagabonds. Jerome spent time as a young student singing in choirs. A man of faith, he learned cantorial music by studying with Louis ‘Leibele’ Waldman and attended Hebrew Union. He later became a guest cantor for many synagogues, and temples during the high holidays across the United States. Although Jerome worked primarily in Broadway, cabaret and popular music, his first love truly was opera. One of his favorite events of the season was working with the Florida Grand Opera’s Young Patroness’, teaching young Girl Scout troupes about opera. He absolutely loved discovering young talented performers and mentoring or coaching. He loved watching a great performance—whether it was a musical act, a TV special, a Broadway show, or an opera—just as much as he loved being on stage. Jerome is survived by his devoted wife, Donna, his beautiful daughter, Alyvia Mann Pollard, son-in-law Nathanial Pollard, and his pride & joy grandson, Miles Ellington Pollard. God looked around his garden and found an empty place. He then looked down upon the earth and saw your tired face. He put His arms around you and lifted you to rest. God's garden must be beautiful- he always takes the best. He knew that you were suffering; He knew that you were in pain; He knew that you would never get well on earth again. He saw the road was getting rough, and hills were hard to climb. So He closed your weary eyelids, and whispered Peace be thine. It broke our hearts to lose you, but you did not go alone For part of us went with you the day god called you home. He will always be in our hearts A memorial service will be held in July of 2021. In lieu of flowers, the family would appreciate a donation of any kind made in Jerome's name to the Parkinson's Foundation, www.parkinson.org Arrangements by Levitt-Weinstein Blasberg-Rubin-Zilbert Memorial Chapel (305) 932-2700

Jerome Stuart Mann was born in Margate, New Jersey and was raised in New York. A talented and gregarious personality, Jerome was always the center of attention, sharing a story or a new joke even before a greeting. As a boy he always loved baseball.... View Obituary & Service Information

The family of Jerome S. Mann created this Life Tributes page to make it easy to share your memories.

Jerome Stuart Mann was born in Margate, New Jersey and was raised...