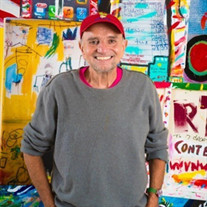 Jerry Powers, 74 the Miami Beach media mogul and socialite who founded Ocean Drive magazine, passed away Wednesday, June 17, 2020. Beloved husband of Sandi of 50 years, loving father of Jacquelynn, adored grandfather of Hannah and Henri, and dear brother of Rosalyn. He was born to Holocaust survivors in Tirschenreuth, Germany, and raised in New Jersey. But he fell in love with Miami on vacation and later made his home in the area, where he launched a counter-culture weekly newspaper and did public relations work for the Yippie leaders of the 1972 Republican National Convention protests. After working as a manager and assistant with artists Andy Warhol, Peter Max and Salvador Dalí in the 1970s, Powers returned to Miami, where in 1992 he launched the glossy Ocean Drive magazine. He leveraged his wealth into philanthropic efforts, including as a board member of the Overtown Youth Center, and tried his hand at creating art of his own. “It was an adventure,” said Jacquelynn Powers Maurice, his daughter. “He believed in ‘yes.’ He did not like the word ‘no.’ Former editor-in-chief of Ocean Drive magazine, Glenn Albin, wrote a tribute to his onetime boss on Facebook. “What I loved most about Jerry was for all the yachts, private jets, villas, celebs paraded through our office, all the non-stop buzz and glitz and 500-page issues we created, in the end all he cared about was his family.” Later in life, he got involved in philanthropy, serving on the boards of Alonzo Mourning Charities and the Miami Beach Police Athletic League. He was honored by the city of Miami Beach, Miami-Dade College and the Ronald McDonald House. Arrangements by Levitt-Weinstein Blasberg-Rubin-Zilbert Memorial Chapel (305) 932-2700 (Excerpts from the Miami Herald)

The family of Jerry Powers created this Life Tributes page to make it easy to share your memories.

Jerry Powers, 74 the Miami Beach media mogul and socialite who...