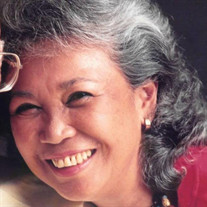 Joy V. Abbott passed away on February 9, 2020. (Obituary taken from the Miami Herald) As an ebullient young singer-dancer-entertainer, she was dubbed &#8220;the Shirley Temple of Hawaii.&#8221; Her first name &#8212; a perfect pairing of name... View Obituary & Service Information

The family of Joy V. Abbott created this Life Tributes page to make it easy to share your memories.

Send flowers to the Abbott family.