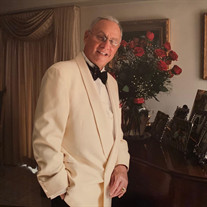 ROZENCWAIG, Lorenzo (Lori) of New York, NY, age 82 passed away peacefully on February 23rd after a brief illness. He is survived by his beloved wife of 58 years Luisa (Lucy), his sons Steven and Bryan, his daughters in-law, Jennifer and Karen and his 7 grandchildren, Amanda, Taylor, Hayley, Madison, Cassidy, Jacob (Coby) and Talia. He is also survived by his sister Rita Srebnick and predeceased by his parents Fajwel (Herman) and Sara Rozencwaig and his brother Israel (Lito) Rozencwaig. Born and raised in Matanzas, Cuba, his parents emigrated from Eastern Europe to escape the persecution of Jews where many family members perished. He studied accounting in Cuba and after graduating la Universidad de Villanueva, started working for the famed Hotel Capri during Fulgencio Batista's 2nd term as Cuba's President. It was the heyday of Cuba's casino and nightclub era where entertainers from around the world would travel and perform, adding to the folklore and glamour of what was once considered "The Night Capital of the World" and "The Latin Las Vegas". He became a principal accountant for the Hotel Capri and held this position through the beginning of Fidel Castro's term as prime minister between 1959 and 1960 when the government took over the tourism industry. He traveled with Castro on a couple of occasions, recruiting young talent from Cuba's universities into the tourism industry. While working at the hotel he simultaneously started building an accounting practice where one of his first clients was "Bijol"; the company whose condiment and seasoning are now known globally as the preeminent staple of Cuban cuisine. However, after recognizing the Cuban government's ideological transition into Communism, he left Cuba and started a new life in New York City with almost no money to his name. As destiny would have it, he would run into an old friend in Manhattan who told him that a young girl he had met in Cuba, and whom he was infatuated with several years before, had moved to Brooklyn with her family. That girl was Lucy, the love of his life for the next 6 decades. Mr. Rozencwaig worked for many years for the International Ladies Garments Workers Union (ILGWU) Local 62 where he eventually became Head of Funds Control. He began building an accounting practice and ultimately left the union to grow his business. He built his practice and served and consulted some of the world's elite and captains of industry. He was the "American Dream". Mr. Rozencwaig was a philanthropist who gave to the less fortunate and to causes he felt deeply passionate about. One of his proudest moments was donating a 500-year old Torah which was installed in the arc of Barcelona's oldest synagogue, dating back to the 9th century. It was his goal to help revive interest in Catalonia and Spain's Jewish past. He also took great pride in his family heritage as he was a blood relative of Chaim Weizmann, the first President of Israel. His great grandfather Shimon Rozencwayg and Mr. Weizmann's father Ozier Weizmann were brothers (many of the brothers changed their last names as was common practice with Eastern European Jews in the 1800's). While he was taken from all of us with more chapters left to his life, he lived a full and accomplished life and left an indelible amount of memories. He will be greatly missed by all of his friends and loved ones and forever remembered. Chapel Service Wednesday, February 26, 2020 at 12:30 pm at Levitt-Weinstein Blasberg-Rubin-Zilbert Memorial Chapel, 18840 W. Dixie Highway, North Miami Beach, Florida (305) 932-2700

ROZENCWAIG, Lorenzo (Lori) of New York, NY, age 82 passed away peacefully on February 23rd after a brief illness. He is survived by his beloved wife of 58 years Luisa (Lucy), his sons Steven and Bryan, his daughters in-law, Jennifer and Karen... View Obituary & Service Information

The family of Lorenzo "Lori" Rozencwaig created this Life Tributes page to make it easy to share your memories.