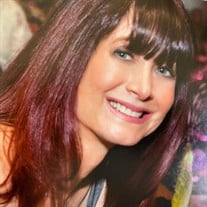 Lori E. Schrier 7/21/62- 9/30/2021 On September 30, 2021, the unthinkable occurred, when Lori Schrier tragically passed away at age 59. Lori was the most beautiful, devoted mother & spouse to her children, Ariana & Matthew, as well as to her spouse, Paul Schrier. Lori grew up in Miami Beach and attended Miami Beach High School. She spent many summers at Rubin's Osceola Lake Inn, her father's resort hotel in Hendersonville, NC. Lori attended the University of Texas, where she enjoyed the lifelong friendships that she made as a sorority sister in SDT. After graduating from UT, cum laude, Lori attended the University of Miami School of Law where she met a fellow law student and the love of her life, Paul Schrier. They were married on March 26, 1988. Lori was a practicing attorney, at the law firm of Robles & Gonzalez, PA, where most of her work centered around assisting victims of asbestos exposure. Just as important to Lori, were the lifelong friendships that she made while practicing law in the same law firm throughout her entire career. Aside from the incredible family and friends, whom Lori adored, Ariana & Matt were the jewels in Lori's life. She was extremely proud of them, and their accomplishments, as well the ethical values that they incorporate into their daily lives. Lori's elegance, thoughtfulness, compassion, vibrant personality, and generosity touched everyone who knew her. She was not only the most beautiful woman in every room, but she was also the most beautiful person in every sense of the word. She will be forever missed and cherished. Lori is survived by Paul Schrier, (husband), Matthew & Abby Schrier, (son & daughter-in-law), Ariana Schrier, (daughter), Joey, (late-brother), Carole Sitzer, (mother; the late Stanley Sitzer), Stuart I. Rubin, (father), (Sally Tappert), Dr. Robert Schrier, (father-in-law), (the late Louise Schrier), Myrna Breitman Schrier, (Robert's wife), Helene Schrier Nankin, (sister in-law; Ken, Jessica, & Amy Nankin), as well as her adoring family and friends. The family requests donations be made in memory of Lori Schrier to the American Foundation for Suicide Prevention, www.afsp.org Chapel Service will be held on Wednesday, October 6, 2021 at 2:00 pm at Levitt-Weinstein/Beth David Memorial Chapel, 3201 N. 72nd Ave., Hollywood, Florida. Under the direction of Levitt-Weinstein Blasberg-Rubin-Zilbert Memorial Chapel (305) 932-2700 Hello, You are invited as a guest to the Viewneral Funeral Service noted below. When: Oct 06, 2021 02:00 PM Eastern Time (US and Canada) Viewneral Service Name: Schrier service Please click the following link to join: https://www.shiva.com/join-viewneral?jc=10000:DlPxy8XtaQBh+8qqE8mltSnhS2ER1wQR:WGWRH9iyqewMP/HG9Ki2bA==:pThQiF2mW6EvayV0W2DCGA== Viewneral ID: Password: 969083 ">960 5297 4972 Password: 969083 Or iPhone one-tap: US: +16692192599,,96052974972# or +16465189805,96052974972# Or Telephone: Dial(for higher quality, dial a number based on your current location): US: +1 669 219 2599 or +1 646 518 9805 Webinar ID: 960 5297 4972

Lori E. Schrier 7/21/62- 9/30/2021 On September 30, 2021, the unthinkable occurred, when Lori Schrier tragically passed away at age 59. Lori was the most beautiful, devoted mother & spouse to her children, Ariana & Matthew, as well as to her... View Obituary & Service Information

The family of Lori E. Schrier created this Life Tributes page to make it easy to share your memories.