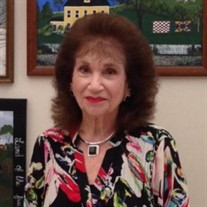 Lyanne L. Wassermann (Lindo) peacefully passed away in Hollywood, Florida on October 9, 2021. Lyanne was born and raised in Panama City, in the Republic of Panama, the daughter of businessman Ralph Lindo and Marguerite Toledano. For most of her adult life, Lyanne lived in the United States, most recently in Hollywood Florida, and prior to that in suburban Philadelphia and Washington D.C. Lyanne is survived by her loving husband, Barton (Barry) Wassermann, her brother Dennis Lindo (Bonnie), children Marc (Lisa Kate) and Richard Wassermann (Nancy), and adored grandchildren Emily (Brandon), Gilbert, Madeline, Marguerite and Hannah Wassermann. Lyanne graduated with a B.A. in 1961 from Beaver College (now Arcadia University) and earned an M.S. in Public Relations from The American University in Washington D.C. in 1980. Following completion of her Master’s degree, she pursued a career in non-profit management, which included high level executive positions at B’nai B’rith Women’s National Office (Membership Director), The American Cancer Society, Camden County, New Jersey unit (Executive Director), Epilepsy Foundation for the National Capital Area (Executive Director), Women in Community Service, Inc. (Executive Director for the region consisting of Pennsylvania, Maryland, Delaware, Virginia, West Virginia and the District of Columbia) and the United Way Retirees Association (Executive Director). Lyanne also served on the board of directors of Temple Sinai, North Dade, and as a Trustee (and later Trustee Emerita) of Arcadia University in Glenside, Pennsylvania. The study and practice of Judaism formed an important part of Lyanne’s life. She played an energetic role in each of the synagogues to which she belonged, serving on numerous committees and participating in significant charitable projects and causes. Following a concentrated period of study, she received a certificate as a Lay Leader from Hebrew Union College in Cincinnati. She was proud of her Sephardic (Spanish and Portuguese Jewish) heritage, and was an expert in the history of the Sephardic Jewish community of the Caribbean, with its roots in the settlers of the Dutch West Indies, ultimately spanning the whole of Central America and the Caribbean region. In this connection, she founded the Archives and Oral History Project of the historic (140-year old) Congregation Kol Shearith Israel in Panama to preserve its history. A soprano, Lyanne sang in and founded several synagogue choirs, and performed in numerous religious services and concerts, including in inter-faith choral concerts in the Miami region. Her love of music was well-known, and she was an enthusiastic concertgoer and supporter of all types of music, but particularly choral and orchestral music. Lyanne was also an avid collector of folk-art paintings, acquired through her extensive travels with her husband, and her collection includes more than 300 paintings, which hang in her homes in Florida and Panama. Lyanne’s life was dedicated to her family, including a large extended family in the Republic of Panama, as well as to the service of others and the performance of acts of charity and loving kindness, both in the United States and in her native Panama. She served as a volunteer for numerous non-profit organizations – charitable, Jewish, political, social action, musical (choral) and educational. She will be greatly missed by her family, friends and the communities which she served. Lyanne’s family will be hosting a private memorial service by invitation on Monday, October 18th. The family request that donations made in memory of Lyanne Lindo Wassermann be sent to the Wassermann-Lindo Music Fund of Temple Sinai of North Dade (payment detail type: Wassermann-Lindo Music Fund), https://www.tsnd.org, The University of Miami Sylvester Comprehensive Cancer Center, https://umiamihealth.org/sylvester-comprehensive-cancer-center/ about-sylvester/make-a-gift or a charity of your choosing. Arrangements by Levitt-Weinstein Blasberg-Rubin-Zilbert Memorial Chapel (305) 932-2700

Lyanne L. Wassermann (Lindo) peacefully passed away in Hollywood, Florida on October 9, 2021. Lyanne was born and raised in Panama City, in the Republic of Panama, the daughter of businessman Ralph Lindo and Marguerite Toledano. For most of... View Obituary & Service Information

The family of Lyanne L. Wassermann created this Life Tributes page to make it easy to share your memories.