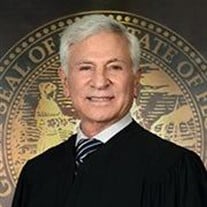 Judge Martin B. Shapiro passed away Monday, August 5, 2019 at his home in Miami Beach. He is survived by his partner Renee Rosenberg, his son Randy Shapiro, six grandchildren, one great-grandson, brothers Joel (Linda) and Richard (Ruthie) Shapiro, nieces Erica, Marcie, Cara and Rachel, and dear friend Jacqueline Simkin. He was born in Cincinnati, Ohio, the son of Herbert and Helen Shapiro. The family moved to Miami Beach in 1945 where “Marty” lived the remainder of his life. A superb athlete in his youth, he was named All-County tailback for Beach High where he also held two statewide track records. He attended the University of Florida where he was president of his fraternity, graduated with highest honors and was a Rhodes Scholar nominee. He received his law degree from University of Florida. Prior to going into private practice in Miami Beach, he worked with the Greenberg Traugig firm. He devoted his life to public service, as a councilman in Bay Harbor, its mayor and then as Miami Beach Commissioner. Marty was elected as a Miami-Dade County Court Judge and served as Senior Judge until his death. Over and above his many accomplishments, Marty was a kind, sweet man who loved to laugh, enjoyed life and treasured his partner, family, close friends and the deep bonds he shared with his fraternity brothers. He will be missed by so many. Donations in Memory of Judge Martin Shapiro may be made to the Mount Sinai Medical Center Foundation for Cardiac Research. https://www.msmc.com/donate/ in the “tribute message” section. Please note that it’s for Cardiac Research. Services will be held at Temple Emanu-El, 1701 Washington Ave, Miami Beach on Sunday August 11, 2019 at 11:00 a.m. Arrangements by Levitt-Weinstein-Blasberg-Rubin-Zilbert Memorial Chapel 305-932-2700

The family of Judge Martin B. Shapiro created this Life Tributes page to make it easy to share your memories.