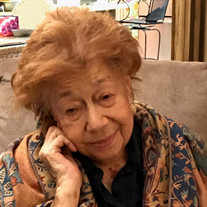 SAXE, Mimi (née Marion Ruth Schultz), died peacefully at home on July 6, 2020. Mimi was born April 16, 1924 in Baltimore and was raised there and then in Morristown, New Jersey, later settling with her family in Newark, where she would eventually graduate from Weequahic High School; she came to Florida in 1969. She received B.S. and M.S. degrees from Barry University and was a longtime clinical social worker, serving into her eighties, specializing in gerontology, and working on Miami Beach and in additional parts of Miami-Dade. She had found that not having attended college and graduate school until she was already in her fifties and, by then, having become a grandmother, served her well while working with her geriatric clients and their families. She eventually earned the designation of Diplomate in Clinical Social Work through the National Association of Social Workers. As she grew older and began to cut back on her professional commitments, she parlayed her love of learning into attending classes at the Osher Lifelong Learning Institute (OLLI) at The University of Miami. Mimi was also a longtime follower of politics and believed that government should work for everyone; after volunteering for the Jimmy Carter Presidential campaign in 1976, she served as the Director of the Florida state chapter of Common Cause, spent time in Tallahassee lobbying on behalf of the organization’s causes, and became part of the leadership team of the South Dade chapter of the Gray Panthers, the largest chapter in the nation, confronting ageism and other social justice issues. She is survived by her loving and devoted husband of 37 years, Norman, brother Floyd Schultz (Marcia), and children Richard Zelman (Jackie) and Diana Zelman(Robert Mugge). She leaves behind grandchildren Jennifer Gordon (Michael), David Zelman, AVIVA Hoback (Richard), Caleb Deitch and Chaiya Rutherford (Abe), and great-grandchildren Jacob Gordon, Shaina, Jacob, Nina, Anabella, Lacey and Jolene Hoback and Megan, Lydia and Jillian Rutherford, nieces Kimberly Schultz and Tracy Schultz (Michael Czarnecki) and her cousins, Helen Rosen and Craig, Jean and Nolan Schultz. She will be missed very much by all who loved her. Donations in her memory may be made to: Temple Judea, 5500 Granada Blvd., Coral Gables, FL 33146, https://www.judeagables.org/ Chapel Service TODAY, July 8th at 12:00 noon at Levitt-Weinstein/Beth David Chapel, 3201 N. 72nd Avenue, Hollywood, FL. Arrangements by Levitt-Weinstein Blasberg-Rubin-Zilbert (305) 932-2700

SAXE, Mimi (née Marion Ruth Schultz), died peacefully at home on July 6, 2020. Mimi was born April 16, 1924 in Baltimore and was raised there and then in Morristown, New Jersey, later settling with her family in Newark, where she would eventually... View Obituary & Service Information

The family of "Mimi" Marion Ruth Saxe created this Life Tributes page to make it easy to share your memories.