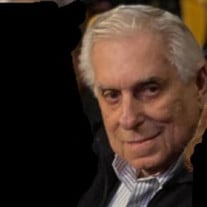 LITZ, NORMAN MORTON, born June 26, 1931, to Florence and Sam Litz, in Philadelphia, PA. His beloved and most special heart and soul left us on September 22, 2020, after a short battle with lung cancer. Norm is survived by his adoring wife of 58 years, Sheila, children Ronni (Alan) Merkin, Steve Litz, and grandchildren Jamie and Jordan Julien and Seth Litz. Norm was extraordinarily proud of his children and grandchildren, never a day went by without a phone call. Norm moved to Miami in 1946. A Miami High School grad, he was a left-handed star pitcher on the baseball team, known as “Lefty Litz”. Thereafter, he pitched for two years as a University of Miami Hurricane. He had offers from the St. Louis Cardinals and the Boston Braves, but instead enlisted in the Air Force during the time of the Korean War. From 1951-1955, he was pride-filled about his time in Los Alamos. He worked in the Los Alamos Scientific Laboratory, and was sent to the Marshall Islands (Eniwetok Atoll and Bikini Atoll) and the Mercury Proving Grounds where he participated in the testing of the atomic bomb and the H-bomb. His incomparable career with the City of Miami Beach spanned 25 years, first as a City auditor, and then as the Director of the Miami Beach Convention Center and the (then) Jackie Gleason Theater of the Performing Arts. Hosting the 1968 Republican National Convention, and the 1972 Democratic and Republican National Conventions were highlights of Norm’s career. Upon “retirement”, as you could not keep a good man down, he became the Lincoln Theatre--New World Symphony Facilities Director, from 1994 through 2008. Like the Lincoln Theatre, Norm, too, was truly a Miami Beach “landmark”. A husband, father, grandfather, uncle, and dear friend like no other. Norm will be the wind beneath our wings, forever. Arrangements under the direction of Levitt-Weinstein Blasberg, Rubin-Zilbert Memorial Chapel 18840 W Dixie Highway, North Miami Beach, FL 33180 (305)932-2700

LITZ, NORMAN MORTON, born June 26, 1931, to Florence and Sam Litz, in Philadelphia, PA. His beloved and most special heart and soul left us on September 22, 2020, after a short battle with lung cancer. Norm is survived by his adoring wife of... View Obituary & Service Information

The family of Norman Litz created this Life Tributes page to make it easy to share your memories.

Send flowers to the Litz family.