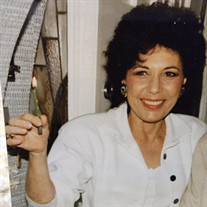 Rachelle (Rachel Habib) Kaminski, an extraordinary woman of valor, passed away peacefully with her children by her side on Thursday evening, April 22, well into her 90th year of a blessed life. Born on September 21, 1931 in Atlantic City, N.J. to immigrant parents Regina and Ralph Habib from Rhodes and Turkey, she was the eldest of four children and was raised in Miami Beach. She was a standout at Miami Beach High School where she won the high school Spanish language achievement award and was voted “best dancer”. After high school and due to her prowess in design, Rachelle was accepted at the prestigious Pratt Institute in New York. However, her devotion to her family brought her back to Miami Beach to assist her parents in business. In 1954, Rachelle met and married the enchanting, worldly and loving Adam Kaminski, a men’s clothier and Holocaust survivor from Poland, and he was the love of her life for the next 51 ½ years until his passing in 2006. Rachelle was a gifted artist in so many ways. She was a brilliant sculptress whose works define her legacy. Many of her works reside in the homes of family members who will treasure her legacy forever. She was also a brilliant seamstress and designer and created her own clothes and unique home designs. Rachelle was an avid tennis player and was active in Hadassah and supported numerous Jewish causes. Rachelle’s greatest achievement in life was her love for and devotion to her parents, husband, children, grandchildren, family, and friends, having taken several family members under her wing for guidance and support. She had a smile that radiated from Earth to Saturn, an infectious laugh that could move mountains, and a presence that could light up any room. She found people fascinating, engaged total strangers as if she knew them for years, and left indelible marks on her Yaya sisters and other groups of friends. Truly one of a kind, the loss of this remarkable woman reverberates across the globe. She will be greatly missed by so many. Rachelle is survived by her devoted children Felice Shannon (husband David Fink), David Kaminski (partner Patrick Auerbach), grandchildren Natasha Vidal, Arielle and Zachary Shannon, great-grandson Ayden Vidal, sister Vicki Ellacott, sister and brother-in-law Dolores and Arnie Wolf, brother and sister-in-law Jack and Talia Habib, dozens of nieces and nephews whom she loved like her own children, and hundreds of family members from around the world. She is predeceased by her parents and her late devoted husband, Adam. Rachelle’s family extends its eternal gratitude and deepest appreciation to her wonderful and devoted caregivers, including the incredible Beverly Wallace and the outstanding staff at Vitas Hospice, especially Dr. Carmen Romero and managing nurse Veronica Stewart. A graveside memorial service will take place on Sunday, April 25 at 1:00 PM at Mt. Nebo-Miami Memorial Gardens (5505 NW 3rd Ave., Miami, FL 33126), and will also be available via Zoom (https://viewneral.zoom.us/j/92152231160?pwd=YklUS0IwZlpYcGNDOHBuQ2lpazZKUT09). In lieu of flowers, Rachelle’s family suggests that donations be made to any Jewish charity or dementia- or Alzheimer’s-related organization. Arrangements by Levitt Weinstein Blasberg Rubin Zilbert (305) 932-2700.

Rachelle (Rachel Habib) Kaminski, an extraordinary woman of valor, passed away peacefully with her children by her side on Thursday evening, April 22, well into her 90th year of a blessed life. Born on September 21, 1931 in Atlantic City, N.J.... View Obituary & Service Information

The family of Rachelle Kaminski created this Life Tributes page to make it easy to share your memories.

Send flowers to the Kaminski family.