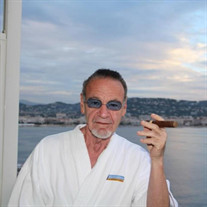 Robert Ian Rosenhaus peacefully passed away Sunday night May 8th at the age of 78. Robert was born in Newark, New Jersey on July 2, 1943, from parents Irving and Ruth Rosenhaus. Robert graduated from Columbia High School in 1961 and then attended the University of Miami his freshman and sophomore years, where he met the love of his life Jill Jackman. Robert transferred to Seton Hall his junior and senior years graduating in 1965. Robert married Jill in August 1965. Their first son Drew Rosenhaus was born in October 1966. Robert then earned his MBA at Seton Hall and in May 1969, their son Jason was born in South Orange, New Jersey. In November 1969, Robert and his family moved to Miami Beach. In March 1971, their daughter Dana was born in Sans Souci North Miami where the family all lived until Hurricane Andrew came in 1992. Throughout the 1970s, Robert worked with his brothers Howard and Richard in the manufacturing business making household items and desktop accessories such as picture frames that could be found in Burdines with his children pictured in the frame. For the rest of his life, Robert took great satisfaction in having kept his word to his father Irv, that he would maintain a great friendship with his brothers after his father’s passing in November 2003. In the 1980s, Robert ventured into the boating and real estate industries enjoying times of high adventure. During that time, Robert befriended several Miami Dolphin players including Joe Rose who often came over the house to sit at the dinner table with Drew and Jason. In the 1990s, Robert and Jill saw all three children, Drew, Jason and Dana graduate from Law School. Learning from their father, Drew and Jason also befriended Miami Dolphin players, and soon thereafter started representing them as NFL Agents. Robert took the greatest of pride in seeing Drew and Jason work together to build one of the most successful sports agencies in the country. One of the greatest days of his life was giving his daughter Dana’s hand in marriage to Adam Swickle in 2000 and Robert thereafter reveled in seeing the two of them ascend into very successful attorneys. In January 2002, while attending a fashion model event accompanying Jill who was covering the scene as a social writer for the Miami Herald, Robert introduced himself to Cassandra Hall whom he insisted meet his son Jason and four years later saw them marry in July 2006. Then in November 2013, Robert and Jill took great pride in seeing their son Drew marry Lisa Thomson. Over the years, Robert cherished every day of his marriage with Jill as they journeyed through their lives together enjoying their legacy of welcoming eight grandchildren Max, Issie, Aubrey, Bronson, Colton, Elle, Blair and Conan. Every accomplishment, every battle won, every victory in business and in life his three children achieved, meant the world to him as he relished their success more than his own. He saw to it that his children would benefit and learn from his hardships to have it better. Through it all, Robert could always be counted on to be there to unconditionally love, to fiercely protect and to fearlessly fight for his family no matter what, when or where. We love you and miss you. Rest In Peace. Services will be held Wednesday May 11th at 11am at Beth Moshe Congregation, 2225 NE 121 Street, North Miami, FL 33181. Arrangements by Levitt Weinstein Blasberg Rubin Zilbert (305) 932-2700.

Robert Ian Rosenhaus peacefully passed away Sunday night May 8th at the age of 78. Robert was born in Newark, New Jersey on July 2, 1943, from parents Irving and Ruth Rosenhaus. Robert graduated from Columbia High School in 1961 and then attended... View Obituary & Service Information

The family of Robert Ian Rosenhaus created this Life Tributes page to make it easy to share your memories.

Send comfort and support when it's needed most.