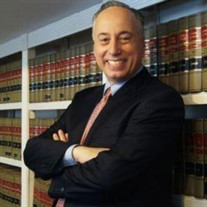 LOWY, Ronald Scott, passed away suddenly on August 6, 2020, at the age of 63 in Aventura, Florida. He was a revered and brilliant lawyer, a caring friend to many and a dedicated community leader devoted to helping the elderly and those with addictions. In 2008 he married the love of his life, Elissa Cook, who brought him great joy as well as two wonderful teenagers, Bradley and Elizabeth, who loved him as a dedicated father. Born in Brooklyn, NY, July 21, 1957, to Sam and Edith Birnberg Lowy (later known as Edith Rains), he brought himself to Miami Beach after high school. He put himself through Miami Dade College and University of Miami Law School at night. In the 1980s he taught paralegal courses about the law at Miami-Dade College and helped that program become the first ABA certified paralegal program in Florida. He also was a frequent guest lecturer and instructor at St. Thomas Law School in Miami and at FIU’s North Dade campus Division of Continuing Education. In the early 1980s he served as an Assistant City Manager of Miami Beach, and was active in the leadership of the Miami Beach Jaycees and other civic groups. From 1986-89, while practicing law, he was also the host on local talk radio WNWS-790AM weekly programs “You and the Law,” interviewing judges and newsmakers on legal subjects. Over his career, he tried well over 75 jury trials in State and Federal Courts, and over 80 appeals (including to the United States Supreme Court). He was a frequent panelist for local Bar Association panels on Ethics and Professionalism. He served on the Friends of the Drug Court Board and as a member of the Metro-Dade County Addiction Services Board. He was honored in 2015 by the Biscayne Bay Kiwanis as its Citizen of the Year. In 2014 he became the Chairman of the Board of the non-profit Plaza Health Network, with its five Skilled Nursing Facilities in Miami Dade County, serving over 650 patients and residents with over 1000 staff members. He loved his work on behalf of the elderly and devoted much time and effort to the 65-year-old company. He was dearly loved by his family, his clients and his friends – and will be missed by all who had the honor of knowing him! Services Private. Arrangements by Levitt-Weinstein Blasberg-Rubin-Zilbert (305) 932-2700

LOWY, Ronald Scott, passed away suddenly on August 6, 2020, at the age of 63 in Aventura, Florida. He was a revered and brilliant lawyer, a caring friend to many and a dedicated community leader devoted to helping the elderly and those with... View Obituary & Service Information

The family of Ronald Scott Lowy created this Life Tributes page to make it easy to share your memories.