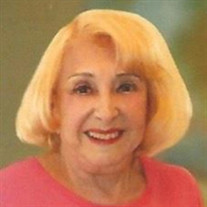 BERGER, ROSALIE: Beloved wife of Alex “Sandy” Berger for 53 years, born May 7, 1929, passed away peacefully at home on April 29, 2022. Survived by her loving sons Eric (Aileen), Adam (Bonnie) and her younger sister Esther Weiner. She is also survived by her four grandchildren Justin, Brittany, Brooke, and Amanda as well as many nieces, nephews, cousins, and dear friends. Rosalie was born in Philadelphia, PA and sang on the radio show Horn and Hardarts Childrens Hour from ages 3 to 6. She was known as “Baby Rosalie”. As a teenager, she toured with a group that sang and entertained the U.S. troops. She moved to Florida with her mother and sister then soon met and married the love of her life, “Sandy”. She became an innovative interior designer and specialized in remodeling kitchens and bathrooms, some of which are still in existence today. Inspired by her mother who lost her painful two-year battle with cancer soon after both children were born, she joined the Papanicolaou Women’s Corp. to help raise money to find a cure for cancer. As other ways to help contribute to the organization, she started the “Pap Angels” and opened thrift stores. In 1980, Rosalie moved to Hallandale Beach, Florida and started the Three Islands Cancer Unit and became its first president. The memberships grew quickly and in 1985, she was elected president of the entire Papanicolaou organization of over 2,500 members. They successfully raised between 3 to 4 million dollars to donate to the groundbreaking building project of the new Sylvester Comprehensive Center which would soon merge with the University of Miami. In 1980, she became a volunteer at the Aventura Hospital where she spent almost 30 years in the ER and Surgical Unit. She received many awards and even ran the gift shop but was especially proud of earning the “Volunteer of the Year” award shortly before she retired. In 1985 thru 1989, she became a “guardian ad litem” for the State of Florida system for the abused and neglected children where she made frequent trips to the juvenile detention centers and courthouses. Rosalie and Sandy loved to travel, but most of all, they loved being around their family and friends. They had a very active social life and were loved by so many. Rosalie was “one of a kind” and when Sandy passed away 11 years ago, Rosalie lost the love of her life and couldn’t mend her broken heart. She always reminded us of how dearly she missed her Sandy and would keep his pictures near her no matter where she would go. Although she had slowed down a little bit recently, she has now unexpectedly departed this world and has been reunited in heaven with her true love. We will miss your sharp wit, warm smiles, infectious laughs, timeless songs and endless love but know that you are now sharing it again with Dad/Pa. All our Love Forever and Ever and until we meet again. In lieu of flowers, the family would suggest that you make a donation to the organization, www.papcorps.org which raises money to fight cancer. Cryptside service 1:30 p.m. Sunday, May 1, 2022 at Beth David Memorial Gardens, 3201 N. 72 Avenue, Hollywood, Florida 33024. Arrangements by Levitt Weinstein Blasberg Rubin Zilbert (305) 932-2700.

The family of Rosalie Berger created this Life Tributes page to make it easy to share your memories.

Send comfort and support when it's needed most.