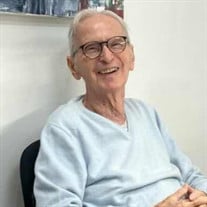 Simon Simkovic (Papa Simon) passed away peacefully on July 31, 2021. Simon was born in Czechoslovakia on May 13, 1930. He was one of ten children born to Rifka and Mordechai Simkovic. In 1944 Simon’s entire family was taken to a concentration camp. Simon and his brother Al, the only other surviving family member, were later reunited and sent to Paris under the guardianship of an organization that cared for orphans. Simon was then sent to Montreal, Canada and was admitted into the United States in 1949. Simon first arrived in Springfield, Massachusetts, and later moved to Miami, Florida to start his own jewelry business, Continental Jewelers. Simon married his lovely wife Phyllis Simkovic on July 7, 1957. Simon is survived by Phyllis, their three children (Martin Simkovic/ Hagit – Reva Hanzman/Michael – and Zeff Simkovic/Lisa) and his eight loving grandchildren (Jordan/Yira Simkovic and Tori Simkovic and her fiancé Ian Margol – Matthew Hanzman – Lauren, Rachel and Jacob Simkovic). Simon was the quintessential “family-man” who treasured time spent with his loved ones. No occasion, however small, was ever missed. Simon was always in the “front row” of every one of his children’s and grandchildren’s events or performances. Simon was loved not only by his family, but also by so many he had brought joy to for over sixty years in the jewelry business. He exemplified the American Dream, having survived the atrocities of the Holocaust to immigrate to the United States and, together with Phyllis, build a successful business through hard work, dedication and perseverance. Simon was a kind, humble and loving man who will be dearly missed, and his memory will always be a blessing to all who had the good fortune of crossing his path. The family request donations in memory of Simon be made to Chabad of Miami, www.chabadmiami.com Graveside Service August 2, 2021 at 1:00 pm at Mt. Nebo Miami Memorial Gardens, 5505 NW 3rd St., Miami. Arrangements by Levitt-Weinstein Blasberg-Rubin-Zilbert Memorial Chapel (305) 932-2700

Simon Simkovic (Papa Simon) passed away peacefully on July 31, 2021. Simon was born in Czechoslovakia on May 13, 1930. He was one of ten children born to Rifka and Mordechai Simkovic. In 1944 Simon&#8217;s entire family was taken to a concentration... View Obituary & Service Information

The family of Simon Simkovic created this Life Tributes page to make it easy to share your memories.