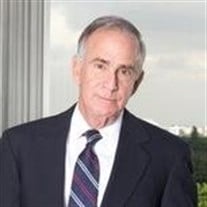 Stephen Kandell December 11, 1945 - January 13, 2022 Miami, Florida - The world lost one of the all time good guys this past week. Longtime Miami resident and prominent attorney Steve Kandell passed away on January 13th, 2022 after a very long 4 round bout with cancer and a very short knockout blow from Covid. Originally hailing from Englewood, New Jersey, Steve came to South Florida in the 1960's to attend the University of Miami and never left. He graduated law school from UM in 1970 and rose from a law clerk to the managing partner of Fuller, Brumer, Moss & Cohen, P.A., which ultimately became Brumer, Cohen, Logan, Kandell & Kaufman, P.A. Steve became well known not only for his excellence as a trial attorney and zealous advocate for his clients but also for his integrity and fundamental decency in the practice of law. Over the course of his successful 51 year practice, Steve tried dozens of cases to verdict, and mentored countless other lawyers along the way, including his son Scott, who continues to work as the managing partner of the law firm of Kandell, Kandell & Petrie, P.A. which bears his name and carries his legacy. Steve was a credit to his community, dedicating thousands of hours of his time to charity and volunteer work throughout his 55 plus years as a resident of Miami. Steve served on the Board of Directors of Temple Beth Am and Deering Bay Yacht and Country Club, and was involved in charitable work with Big Brothers/Big Sisters of America, Boy Scouts of America, Suniland Optimist Soccer, Family Resource Center, City of Miami Disabilities Program, Paws 4 You, amongst others. Steve leaves behind his brother Phil (Lynn) longtime companion Bonnie Chase, his two sons Scott (Jill) and Brett (Jenny), his ex-wife Jill Gordon, with whom he remained close, his much adored grandchildren Frankie, Jonah, Alex, Syvie, Blake and Cory and lastly and certainly not least in his eyes, his dogs Coco and Buddy. Steve loved to travel, especially enjoying his time in Colorado during all seasons. He loved his teams, mainly the Canes and Marlins, and although he complained about them the most, we think he secretly liked the Dolphins too. Steve loved golf and his living reef aquariums and much time was spent trying to perfect both his game and his coral. Somewhere Steve is hitting them straight, dogs in tow, reflecting on a life well lived as he gazes out at a glorious sunset view at Pebble Beach, knowing that he touched so many lives of all the people he met along the way. Service will be held 10:15 a.m. at Lakeside Memorial Park, 10301 NW 25th Street, Doral, FL 33172, on Sunday, January 16, 2022. Arrangements by Levitt Weinstein Blasberg Rubin Zilbert (305) 932-2700.

Stephen Kandell December 11, 1945 - January 13, 2022 Miami, Florida - The world lost one of the all time good guys this past week. Longtime Miami resident and prominent attorney Steve Kandell passed away on January 13th, 2022 after a very long... View Obituary & Service Information

The family of Stephen Kandell created this Life Tributes page to make it easy to share your memories.