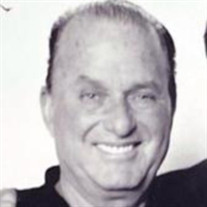 Stewart Barry Eisenberg Loving father, grandfather, brother, uncle and friend… Born in Newark, New Jersey to Herman and Frances “Toots” Eisenberg, Stewart attended Hillside High School, Boston University and later Seton Hall. Stewart was a long time resident of North Miami and later Aventura who moved to Miami in 1962 after the birth of his eldest son with his wife, Judy Kossoff. Together with his father-in-law, Bing Kossoff, Stewart became a successful builder and industrial developer. His trademark buildings still stand proud today. Stewart was larger than life and adored by all who knew him. He always left a lasting impression. He was a bon vivant who enjoyed the finer things in life; clothing, dining, watches and cars. He was a wonderful, loving father and grandfather and never missed an opportunity to be with his family and to share milestones, holidays and achievements. Stewart is survived by his sons Dean Eisenberg (Shanaaz) and Neil Eisenberg (Lisa Miller) and his grandsons Zain, Zaric, Maxwell and Benjamin Eisenberg, granddaughter Jordan Miller and great granddaughter, Penelope Perez as well as his beloved sister Andrea Prince and his niece and nephew Stacey and Darren Prince. Chapel service in his honor 2:00 pm Friday, August 20, 2021 at the Levitt-Weinstein Blasberg Rubin Zilbert Memorial Chapel, 18840 West Dixie Highway North Miami Beach, Florida 33180 (305) 932-2700, with a graveside service to follow on Sunday August 22, 2021 at B'nai Abraham Memorial Park in Union, New Jersey where he will be laid to rest alongside his family.

The family of Stewart Barry Eisenberg created this Life Tributes page to make it easy to share your memories.

Send flowers to the Eisenberg family.