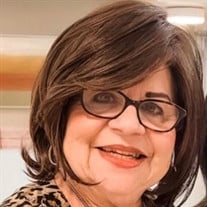 Vivian Mechaber, 74, died peacefully surrounded by her family on June 6, 2021. Vivian is survived by her beloved husband Manuel Cascales, devoted son Alex (Hilit) Mechaber, and grandchildren Gabi and Amanda Mechaber, and cherished daughter Marlo (David) Tuaty, and grandchildren Garrett, Paul, Dylan Tuaty. She is predeceased by her late husband Gerardo Mechaber, parents Ana and Ruben Celnikier, and brother Morris Celnikier. As the daughter of Russian and Romanian immigrants, Vivian’s parents Ana and Ruben Celnikier, escaped to Cuba during the brink of WWII in Europe and were part of a large exodus of Jews to Cuba in response to the rise of the Russian Pogroms led by the Bolshevik party, seeking economic, political and religious freedom. Ana and Ruben married in Havana, and decided to settle, having their children, Vivian and her late brother Morris and began working in the clothing industry. At the age of fourteen, on April 7th, 1961, Vivian was sent to Miami only with her brother to leaving her parents behind, to escape the Castro regime. They stayed briefly with an aunt who had already settled there. During her initial brief time in Miami, before moving to New York and then returning, she was one of only 36 Cuban high school students at Miami Beach Senior High School. Soon after arriving in Miami in 1961, Vivian’s father quickly found work in New York. The family moved to New York in October of 1962 and lived in the Bronx until finally returning to Miami as their final destination in 1972. It was in New York that Vivian met her late husband, Gerardo Mechaber, a fellow Cuban Jew, and graduated high school. She and Gerardo married, and Vivian gave birth to her first child, her son Alex. In 1972, Vivian and her growing family moved back to Miami to settle in the burgeoning new area called “Kendall.” She became a part of the large growing “Jewban” community in Miami, with many friends and family from Cuba also living close by. Marlo was born soon after. Vivian kept in touch with many friends who emigrated together. Her 5th grade class celebrated their 50th anniversary together here in Miami. While raising their family in Miami, Vivian and Gerardo opened successful clothing boutiques. As an entirely self-taught accountant and entrepreneur, Vivian assumed the role as head buyer and bookkeeper for their store. She played a large role in establishing the fundamental success of the boutique by learning and observing from her father’s businesses. Tragically, her dear husband Gerry passed away suddenly at the age of 43 while dancing at “El Circulo,” the famous Cuban-Hebrew Congregation in Miami Beach. At the time Alex was 15 and Marlo 11. She was a woman who displayed tremendous grit, resilience and determination by which she lived her life. Vivian was a survivor, living life through the motto that, “nothing is impossible, and adversity is something you fight through.” As a newly widowed sole parent, she adopted the roles of matriarch and patriarch with grace, dignity and a whole lot of perseverance. She worked tirelessly to ensure that her children had everything they needed, including access to a great education. She loved them beyond everything else and taught them to live in the moment because she learned that one could never know what tomorrow might bring. Vivian derived much of her tenacity and strength from her mother Ana and her compassion, sensitivity and wisdom from her father Ruben. She was also incredibly smart, acquired one “PhD” in combating adversity and another degree in providing sage advice. She was an expert on everything from child rearing to fashion, and wickedly astute with finances and investments. She was also relentless in her pursuit of happiness and never let anything stand in her way. She lived for her family. She was fortunate to meet a new love in her life, Manny, who brought her happiness and companionship for more than 25 years. A beloved Abu to her grandchildren, Vivian relished every opportunity to see her 5 “pollitos” and cheer them on in all of their endeavors- never missing a theater performance, art show or soccer game. She was like a lioness always looking after her cubs. Vivian also had more energy than plenty of people half her age, from babysitting the two-legged and four-legged grandchildren, to all day running around on vacations across the globe. She traveled far and wide to move her children and grandchildren into college and then new homes. She was always willing to go the extra mile to do anything and everything for her family. In her last two years, she took cancer on as a challenge, like all others she had faced in her life. She “fought the suckers,” and like all adversity, she never gave up and flashed her radiant smile all along the way. She fought for what she believed in, advocated for herself and always for her family with elegance, style and grace. Vivian inspired all, teaching daily and showing her family the way forward. She was a true hero, who blessed her family as a daughter, sister, mother, grandmother, and aunt who was extraordinary in every way. The family request donations in memory of Vivian Mechaber be made to the Gynecologic Oncology Group (GOG) Foundation, www.gog.org Graveside Service will be held on Tuesday, June 8, 2021 at 1:00 pm at Mount Sinai Memorial Park Cemetery, 1125 NW 137th St, Miami. Arrangements by Levitt-Weinstein Blasberg-Rubin-Zilbert Memorial Chapel (305) 932-2700

The family of Vivian Mechaber created this Life Tributes page to make it easy to share your memories.