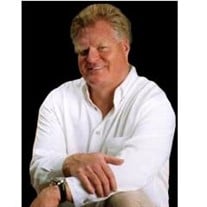 Peter Terrell Loftin, age 61, passed away peacefully at his home in North Miami Beach, Florida on November 16, 2019. Peter was born in Denton, North Carolina and grew up in New Bern, North Carolina where he attended school and played basketball for his high school team. He later attended North Carolina State University. Pete was a big guy with an even bigger heart who was known for his giving spirit, contagious laughter and his energetic charisma. The world has lost a forward-thinking, industry-leading businessman, a loving father, and a passionate philanthropist. Peter Loftin made his mark in the telecommunications industry after the Bell telephone monopoly break up. In 1983, he founded and led the Raleigh, N.C. based Business Telecom Inc. (BTI) to the successful expansion of the corporation to one of the nation’s top telecommunications companies as well as the largest private employer in the city. Loftin is credited with being the pioneer of flat-rate pricing for long-distance in the telecommunications industry. Business North Carolina Magazine named Loftin “North Carolina Entrepreneur of the Year.” In addition, the North Carolina Electronics and Information Technologies Association awarded him and BTI the “Corporate Citizen of the Year Award” for generously providing free Internet services to people with disabilities in rural schools throughout North Carolina. Pete Loftin was also widely known for his purchase of the Versace Mansion in 2000 and creating Casa Casuarina in Miami Beach, Florida. He used this opportunity to give back to the community by gifting the magical Casa Casuarina venue for more than 30 significant charities, as well as creating a unique, high-end Boutique Hotel and Club. He was also a founder of GlobeSecNine (now known as Torch Hill Investment Partners), to provide growth capital to companies involved in the defense and intelligence industry. He also founded CM3 Group, a counter-terrorism contracting company. His latest passion was the creation of Kentucky based Bardstown Bourbon Company in 2016. Bardstown Bourbon Company, also known as BBCo, is the largest new whiskey distillery in the United States and is the first-of-its-kind Collaborative Whiskey, Bourbon, and Rye Distilling Program. Loftin was instrumental in the Constellation Brands partnership. Constellation Brands is a Fortune 500 company with a diversified spirits portfolio and with BBCo, plans to develop new brands and create a long-term supply of authentic Kentucky whiskey, bourbon, and rye. Set on 100 acres of active farmland and adjacent to the Bluegrass Parkway, BBCo’s Napa Valley-style destination experience, features a unique concept. In addition to its distillery, the facility has a visitors and educational center, event space, and a restaurant and bar. Loftin was very generous with his philanthropy, which started with his own charity, “Coats for Kids,” that he launched while in his early 20’s. His giving and charity activities are too many to mention, although below are some charities that were very close to his heart: ● Largest contributor/naming rights to the BTI Center for the Performing Arts in downtown Raleigh, NC (now known as Duke Energy Center for Performing Arts) ● North Carolina Museum of Science, Founding Contributor ● Camp BTI: Boys and Girls Club of America Camp for Kids ● Oak Ranch Facility for Troubled Teens ● Contributor Special Operations Fund (SOF) ● Contributor to the Make-A-Wish Foundation. ● Generous Donations to the Airborne Special Operations Museum ● City of Miami Beach Certificate of Appreciation for his contributions He was also involved with the following prestigious organizations: National Board of Governors of the American Red Cross, The American Lung Association board member, Board of Visitors of the Kenan-Flagler Business School at UNC-Chapel Hill, the Advisory Board of the Duke Heart Center at Duke University Medical Center, Board of Directors of the Greater Raleigh Chamber of Commerce, and the Council for Entrepreneurial Development (CED), board member for the Miami Police Athletic League. He is preceded in death by his parents, Maree Nelson Loftin and Robert G. Loftin. He has two brothers, Thad Loftin of Greensboro, NC and Geoff Loftin of Garner, NC and several nieces and nephews. He was a loving father to three wonderful children, Jorian Peter Loftin of Franklin, TN, Jagger Piercson Hall-Loftin and Jett Perrin Hall-Loftin of Lucasville, OH. There will be a Celebration of Pete’s life at 11:30 a.m. Saturday, December 7, 2019, at Winston’s Grille in Raleigh, NC. There will be a memorial from Associate Pastor Ashley Will of North Raleigh United Methodist, followed by a life celebration. Supporting his Country and the military was very important to Peter. He was a very active and early supporter of the Special Operations Fund and a great and quiet supporter of every special operator. The Fund provides scholarship support to widows and children of the Joint Special Operations Forces. Checks in memory of Peter Loftin can be mailed to the Special Operations Fund, 901 N. Stuart Street, Suite, 1200, Arlington, VA 22203. Arrangements by Levitt-Weinstein Blasberg-Rubin-Zilbert Memorial Chapel (305) 932-2700

Peter Terrell Loftin, age 61, passed away peacefully at his home in North Miami Beach, Florida on November 16, 2019. Peter was born in Denton, North Carolina and grew up in New Bern, North Carolina where he attended school and played basketball... View Obituary & Service Information

The family of Peter Terrell Loftin created this Life Tributes page to make it easy to share your memories.

Peter Terrell Loftin, age 61, passed away peacefully at his home...

Send flowers to the Loftin family.