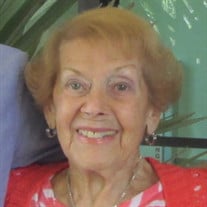 BEATRICE SINGER March 26, 1924 – December 12, 2021 Beatrice Singer passed away on December 12, 2021, at the age of 97. The daughter of Isadore Lederman and Anna Weisman, Bea grew up with siblings Julius, Natalie, Sonia and Lillian in Allentown, Pennsylvania, where she held clerical positions. In 1948, she married Jack Schobel, and the couple lived in Allentown with their sons Robert and David. A devoted homemaker, Bea volunteered with the Red Cross, was an avid bowler and golfer, and starred in several amateur theatrical productions. Her singing and humming were nearly as essential to life as breathing and eating. After Jack’s passing in 1977 and David’s in 1979, Bea moved to Park Place in Pembroke Pines, Florida, where she met Louis Singer, a widower from Pittsburgh. They married in 1980, and began their second multi-decade marriage. The couple enjoyed golfing, theater and socializing with couples whose friendship endured following Lou’s passing in 2011. Following a series of medical setbacks in summer 2021, Bea was cared for full time by Dawnn Riley, who provided comfort during her final hours, and Sandra Nelson, who was Bea’s part-time companion for the past several years. Friend, advocate, cook, driver and caregiver, Sandra gave Bea’s family peace of mind knowing that she was in very good hands. Surviving are Robert Schobel and his wife Angela; grandson Ian; grandson Jeremy, his wife Megan and great granddaughter Norah; and many nieces and nephews and their families. Also surviving are Lou’s sons, Irwin and Ron, and their wives, children and grandchildren. Feisty and determined, she will be remembered by her entire family for her sense of humor and generosity, never forgetting a birthday or other special occasion. Beatrice Rose Lederman Schobel Singer was cremated with arrangements made by Levitt-Weinstein Memorial Chapel in Hollywood, Florida. Her ashes will be interred in a family plot at Temple Beth El Memorial Park in Allentown, Pennsylvania, at a ceremony in Spring 2022. Donations in Bea's memory can be made to NephCure Kidney International, www.nephcure.org or to a favorite charity.

The family of Beatrice Singer created this Life Tributes page to make it easy to share your memories.