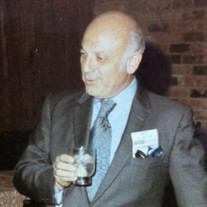 Ben Alter, of Bay Harbor Islands, FL passed away Saturday morning, May 8, 2021 in the comfort of his own home, where he’d been living since 1955. A strong, loyal, brilliant and generous family man; Ben was taken from us just 15 weeks after his 106th birthday. Born on January 26, 1915 in Davenport, Iowa to Max and Bella Alter, the family moved to New York in the early 1920s. Ben met and married the love of his life, Pauline Alter in 1939. Ben and Pauline had two children, Ronald and Carolyn. The Alter family moved to Bay Harbor Islands, FL in the early 1950s, and it was here in Miami, where this consummate family man and business pro built the largest auto parts warehouse in all of Florida. Ben sold his business at the age of 70, but retirement was not an option. His love for work and keeping busy led him to become an auxiliary policeman for the City of Miami Police Department. Ben also worked at his son Ronald Alter’s law office until the age of 91. Ben was a founder at Mount Sinai Medical Center, longtime member of Temple Menorah, as well as the Beth Moshe Congregation, and a supporter of charities such as Fight for Sight. A constant source of unconditional love and encouragement, Ben, equipped with a heart of gold, was always very active and involved in the lives of his children and grandchildren. As our Patriarch and legendary superhero rests peacefully, he joins his beloved wife Pauline, and his beloved grandson, Gregory in heaven. Ben is survived here on earth by his children, Carolyn and Ronald, and grandchildren, Jeffrey Horowitz and Craig Alter. Ben was the best husband, father, and grandfather anyone could ask for, and his memory will remain in our hearts and minds for eternity. Thank you for everything, Ben. You will never be forgotten, as Legends Never Die. Rest in Paradise.

Ben Alter, of Bay Harbor Islands, FL passed away Saturday morning, May 8, 2021 in the comfort of his own home, where he&#8217;d been living since 1955. A strong, loyal, brilliant and generous family man; Ben was taken from us just 15 weeks after... View Obituary & Service Information

The family of Ben Alter created this Life Tributes page to make it easy to share your memories.

Send flowers to the Alter family.