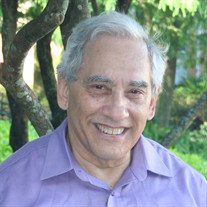 Edward Lasoff, 78, of Miami, Florida passed away peacefully on April 24, 2021. Born on May 12, 1942 to Morris and Sophie Lasoff, Edward grew up in Akron, Ohio, graduating from Buchtel High School and then going on to earn degrees in Mathematics and Psychology at the University of Akron. After serving in the US Army, he continued pursuing his lifelong passion of learning and teaching by earning both his Masters and PhD in Educational Research at the University of Miami. While completing his post-graduate studies, he fell in love with a fellow doctoral candidate, Marva Robinson of Kingston, Jamaica – the two were wed in 1974 and had two children together. With newly-minted degrees in-tow, Edward embarked on a 35-year career as a high school mathematics teacher educating thousands of students throughout Miami, though his impact on young people wasn’t just limited to in-classroom teaching. He spent time helping students with extracurricular activities as well, most notably by coaching boys’ and girls’ soccer teams and leading the chess club. Outside of the public-school system, he maintained his enduring commitment to teaching by working as an adjunct professor at a number of universities across South Florida, not to mention as a neighborhood tutor, a piano teacher, and a Sunday School teacher. Edward also had a lifetime love of music, playing the piano his entire life and dabbling in other instruments as well (especially the trumpet in high school and college). His involvement in music knew no bounds: while he especially enjoyed performing jazz and boogie-woogie, he could also be found participating in choirs, barbershop quartets, a capella groups, and musical theater. It was in his retirement from teaching that he was able to combine his zeal for learning with his enthusiasm for music. At a time when his peers may have been slowing down to enjoy retirement, Edward returned to school as a student, studying advanced music composition and music theory for years at the New World School of the Arts, Miami-Dade College, Florida International University, and the University of Miami, eventually earning a Bachelor of Music degree. He was the type of man that made people stop and remark about his kindness. His innate optimism and ability to see the best in others were key elements of his personality and helped him to be a caring and thoughtful educator throughout the years. So many lives were touched by his presence and he will be missed dearly. Edward was predeceased by his wife and parents. He is survived by his two children, David and Shira; his grandchildren, Taylor, Dylan, and Carter; and his sister, Harriet. Funeral services were held on Thursday, April 29th at 3pm at Rose Hill Burial Park in Akron, OH and also live-streamed for those unable to attend in-person. Condolences may be sent to [email protected] In lieu of flowers, donations in Edward Lasoff's memory can be made to The Kretzer Music Foundation, a 501(c)(3) organization Arrangements by Levitt-Weinstein Blasberg-Rubin-Zilbert Memorial Chapel (305) 932-2700

Edward Lasoff, 78, of Miami, Florida passed away peacefully on April 24, 2021. Born on May 12, 1942 to Morris and Sophie Lasoff, Edward grew up in Akron, Ohio, graduating from Buchtel High School and then going on to earn degrees in Mathematics... View Obituary & Service Information

The family of Edward Lasoff created this Life Tributes page to make it easy to share your memories.

Edward Lasoff, 78, of Miami, Florida passed away peacefully on...