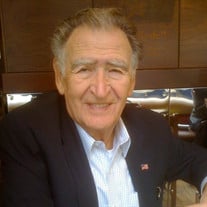 Leo Rosner, Holocaust Survivor and US Army Veteran during the Korean War, passed away on July 17, 2021 (on the 8th day of Av) in Miami at the age of 92. He was the husband of Fanny (Lisitzky) Rosner, father of Esther Shany Rosner and Jackie Bernard Rosner, son of Esther and Moses David Rosner (in blessed memory), brother of Malkaleh (in blessed memory) and brother-in-law of Joseph Lisitzky. May his memory continue to inspire what he always believed in: to keep the faith, to never give up hope, and to always remember and never forget The Holocaust. Leo Rosner was born in 1929 in Zmigrod, Poland, to Esther (Findling) and Moses David Rosner. His mother and his younger sister Malkale were shot and killed in a mass grave in 1942 during the Holocaust. He survived nine concentration camps and forced labor camps. He was liberated from the Mauthausen concentration camp in May 1945 by the United States Army. After arriving to the United States on a student visa in 1948, he was drafted into the US Army in 1952, completed military intelligence training in Fort Bragg, North Carolina, and was deployed to Germany, joining the Allied occupation forces. He served with pride and spoke very fondly of his military service. Thirty years after the liquidation of his hometown of Zmigrod, and the killing of his mother and sister, he was destined to meet some of the murderers again, this time in a court of law. He was invited by the German government to testify in a trial in Arnsberg, Germany in March 1972. Seven Gestapo were brought to trial for the murder of Jewish people in his hometown and in the towns of the district of Krakow. With the help of his testimony, five of them were sentenced to five years imprisonment. In July 1990, with his friend and fellow Holocaust Survivor Mordechai Findling, Leo Rosner traveled to Poland and identified the mass grave where his mother and younger sister were shot and killed. They revisited their birthplace again in July 1993 and unveiled monuments in the village of Halbuv, in the Warzyce Forest, to memorialize 1,250 victims in mass graves so that future generations may see and remember the atrocities of the Holocaust. In 2004, Leo Rosner published his memoir titled “The Holocaust Remembered: A Child Survivor’s Account of Imprisonment and Redemption, 1939-1945”. He dedicated his life to teaching and promoting Holocaust education. He was an eloquent and articulate speaker and would captivate any crowd when describing his life experiences. Leo Rosner was a deeply religious and spiritual man, with an encyclopedic knowledge of the Torah, Tefilot, and all Jewish customs and traditions. He was a kind and generous man, with a wonderful sense of humor and a knack for telling clean jokes. He enjoyed trading the stock market, something he did successfully and methodically with great discipline. He is survived by his wife of 60 years, Fanny (Lisitzky) Rosner; daughter Esther Shany Rosner, son Jackie Bernard Rosner and brother-in-law Joseph Lisitzky. Shiva will be private. If you want to make a charitable donation, please do so to the Holocaust Education and Documentation Center, www.hdec.org in honor and memory of Leo Rosner, Holocaust Survivor. Graveside Service will be held Monday, July 19, 2021 at 2:30 pm at Lakeside Memorial Park, 10301 NW 25th Street, Doral, Florida. Arrangements by Levitt-Weinstein Blasberg-Rubin-Zilbert Memorial Chapel (305) 932-2700

Leo Rosner, Holocaust Survivor and US Army Veteran during the Korean War, passed away on July 17, 2021 (on the 8th day of Av) in Miami at the age of 92. He was the husband of Fanny (Lisitzky) Rosner, father of Esther Shany Rosner and Jackie... View Obituary & Service Information

The family of Leo Rosner created this Life Tributes page to make it easy to share your memories.

Leo Rosner, Holocaust Survivor and US Army Veteran during the...