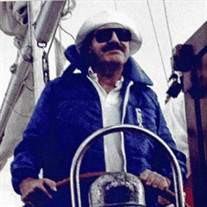 ROSENTHAL, Murray For nearly five years, Murray ‘Roy’ Rosenthal, resident of Aventura, Florida, bravely fought the cancer that ended his life on October 8, 2020 at age 84. Roy (as he was known to many) was loved for his wonderful sense of humor and outgoing personality and for his endearing trait of remembering friends’ birthdays and anniversaries. A gifted raconteur, he reveled in entertaining an audience with a clever joke or story. He had a remarkable memory and friends were often amazed by his knowledge of history and geography. Murray was born in Brooklyn, NY and moved with his family to Miami Beach as a youngster, fell in love with South Florida and became very knowledgeable of its history. He was a graduate of Miami Beach Senior High, studied at the University of Miami. He met his life-long sweetheart, Enid Tobias, when she was in high school. They were married in 1957. He served in the U.S. Army and had a thirty year career in banking, during which time he served his community in many posts, including the Bay Harbor Development Association, Bay Harbor Island Art Festival Committee, North Shore Kiwanis, Gold Coast Chamber of Commerce, and as Community Liaison Officer for the Bay Harbor PTA. He was an avid sailor, boatman and fisherman and enjoyed gardening. Gourmet cooking was one of his many pleasures. A talented writer and history buff, Murray penned many short stories and was a frequent contributor to local publications with articles concerning South Florida history under his pen name, Ray Rosen. He loved his pets and had many during his lifetime. Murray is survived by Enid, his adoring wife of 63 years, his sister Marlene Hirsh, brother-in-law David Tobias and wife Marlene, sister-in-law Sally Dreispul and husband, Gary, and extended family of loving nieces and nephews. Services were held. Donations may be made to the ASPCA, www.aspca.org. Arrangements by Levitt-Weinstein Blasberg-Rubin-Zilbert Memorial Chapel (305) 932-2700

ROSENTHAL, Murray For nearly five years, Murray &#8216;Roy&#8217; Rosenthal, resident of Aventura, Florida, bravely fought the cancer that ended his life on October 8, 2020 at age 84. Roy (as he was known to many) was loved for his wonderful... View Obituary & Service Information

The family of Murray "Roy" Rosenthal created this Life Tributes page to make it easy to share your memories.