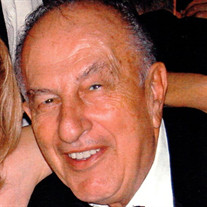 REIBER, Nathan 86, passed away July 1, 2014, after a lengthy courageous battle with cancer. Nathan was born in Czestochowa, Poland on October 14, 1927 and emigrated to Montreal, Canada with his parents and siblings. He attended Law School at the University of Alberta and upon graduation he moved to Toronto, Canada, to practice law. In the late 1970s he retired to Miami Beach. Nathan’s retirement lasted only one week as he took a walk on West Avenue and saw a vacant lot, purchased it and built his first of many apartment buildings in Florida. He continued as a developer for the next 50 years building and managing real estate projects throughout Canada and Florida. Locally, he built the multiple Champlain Towers in Surfside and was given the key to the city upon its completion in 1986. He was not only successful in business but more importantly; he was dedicated to his family and the community. His greatest joy was his family and spending summers in the Berkshires with them and traveling the world with his wife, Carolee. He served as a board member of Mt. Sinai Hospital-Toronto, Canada, of YMHA and Miami Beach's Temple Emanuel. He was a Grand Founder at the University of Miami and a Founder at Mount Sinai Hospital, Miami Jewish Health System, Lowe Art Museum, Adrienne Arscht Center and a Benefactor of Tanglewood Music Festival and the Berkshire Theater Festival. He was most proud of his involvement with the think tank, Jewish Institute of National Security Affairs “JINSA” where he served as the National Executive Vice President. During his term, he addressed NATO and met with world leaders from Spain, Hungary, Germany, Ethiopia and Uzbekistan discussing issues of world security and defense. Nathan is survived by his wife, Carolee, brother and sister, Jack Reiber and Shirley Cadesky, his children Terrence and Jonie, Lawrence and Sheila, Keith and Andrea, Jill and Mark, and seven grandchildren, Zachary and Jason Reiber, Benjamin, Hallie, and Elisabeth Meland, and Jared and Caroline Hartley. In lieu of flowers, donations may be made in Nathan’s memory to Sylvester Comprehensive Cancer Center, P.O. Box 016960 (M-867), Miami, FL 33101 or Mount Sinai Comprehensive Cancer Center, 4300 Alton Road, Miami Beach, FL 33141. Services will be held on Thursday, July 3, 2014, at 11:00 a.m. at Temple Beth Sholom, 4144 Chase Avenue, Miami Beach. Arrangements by Blasberg-Rubin-Zilbert (305) 865-2353

REIBER, Nathan 86, passed away July 1, 2014, after a lengthy courageous battle with cancer. Nathan was born in Czestochowa, Poland on October 14, 1927 and emigrated to Montreal, Canada with his parents and siblings. He attended Law School... View Obituary & Service Information

The family of Nathan Reiber created this Life Tributes page to make it easy to share your memories.

Send flowers to the Reiber family.