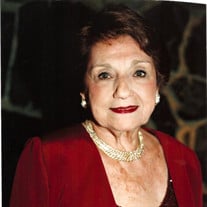 Shirley Stein Spector, 101 years old, died peacefully on November 13. Shirley lived on Miami Beach for 71 years. She grew up in Morgantown, West Virginia and was graduated from the University of West Virginia. Following college, she worked in NYC for Bergdorf Goodman and then moved back home with her first husband James Rothman. After his death in 1949, Shirley moved down to Florida with her infant daughter Berna. In 1950, she met and married J Bernard Spector, a prominent local attorney. In 1952, their second child Anna was born. Shirley and Barney embraced life in Miami Beach making many friends and becoming known for their generous hearts and delightful style of entertaining. Shirley was an active member of the community on the boards at Mt Sinai Hospital and the Appalachian Summer Festival in Boone North Carolina. She was a lifelong member of Temple Beth Sholom. An interior designer, Shirley had a wonderful sense of style. She loved to travel and took trips all over the world with family and friends. Shirley and Barney bought a house in the North Carolina mountains in the early 70s way before it became a popular destination with Floridians. Many of their friends followed them there during the summers and they had a wonderful life enhancing the community around them as well. She charmed everyone she met and people loved sharing her daily cocktail or playing cards or just being in her presence. She was wonderful to those who worked for her… Hermenia and Pepe and Jean, Edithe and Mirlande. Shirley’s family was the centerpiece of her life. Her mother lived in Miami Beach and her two sisters Florence and Zelda visited with their children often. She also embraced Barney’s three brothers and their families, two of whom lived in the area. Her children and her grandchildren were her pride and joy. Shirley is survived by her daughter Berna and her husband Michael and Anna and her husband Alan. Todd and Tali, Jason and Rachel, Charlotte and Gabe, Benji and Steffi, Lilah, Wesley, Zeke, Graham and Gigi brought her so much joy as did her nieces and nephews. She will always be remembered and loved. A family service will be held at Mt Nebo Cemetery on Monday, November 15 and following that the family will be sitting Shiva at 5660 Collins Avenue Apt 17 D from 5-9PM. The family requests that donations be sent to Planned Parenthood or the Appalachian Summer Festival in Boone, North Carolina. Arrangements by Levitt Weinstein Blasberg Rubin Zilbert (305) 932-2700.

Shirley Stein Spector, 101 years old, died peacefully on November 13. Shirley lived on Miami Beach for 71 years. She grew up in Morgantown, West Virginia and was graduated from the University of West Virginia. Following college, she worked... View Obituary & Service Information

The family of Shirley Stein Spector created this Life Tributes page to make it easy to share your memories.